In case people think I have lost touch with the youth, I have not. I'm right behind them. I have my myspace space, I have my Hyves account, and I even have an avatar on Second Life.

For those of you who don't know hyves, it's a social networking thing like myspace, except without the spam and the sex. It's quite popular in the Netherlands, possibly more so than myspace. One difference is that in myspace most of your 'friends' are people you don't know: bands who want to look popular, hot chicks who want to sell you t-shirts and hot chicks who want you to sign up to their web site to see their titties. On Hyves pretty much all of your 'friends' are people you know. Consequently I have very few friends on Hyves compared to myspace. I always feel relatively popular on myspace. Although not compared to the hot chicks with t-shirts or tittie-sites who have thousands and thousands of friends: alot of whom are other hot chicks with tittie-sites. 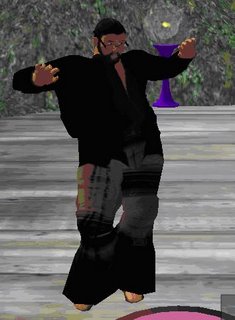 It is on Second Life that I feel I have achieved more. Second Life for those of you still very much concerned with the first one is a 3D-representation of the real world where you control an 'avatar' or human graphic and explore the world. It's very much like the real modern world in that it's chock full of advertising, most of the places seem to be concerned with getting money from you and when you really want to go and do something it's frustratingly slow. I am, however, proud that in my short time in this alternative advertising reality I have managed to make money. Real money, because there is an exchange rate between First Life US Dollars and Second Life Linden Dollars that you spend on things like face-lifts and property in Second Life. (It is currently 250 Linden Dollars to 1 US Dollar.) I have earned, for ten minutes dancing, 3 Linden Dollars. It may not sound like much, but it's a lot of money to be paid for dancing when you're a short, over-weight man with a beard.

The trouble now is to find something that costs as little as 3 Linden Dollars to spend it on.
Posted by Peter More at 11:34
Email ThisBlogThis!Share to TwitterShare to FacebookShare to Pinterest
Labels: Computers, Games, Netherlands