Saturday saw Catherine, once a marathon-level athlete, reliving glory days with her sister along a bit of the same canal that runs near Harpers Ferry. This ditch was once a source of revenue and vital transportation route, and is now a great place to watch turtles hang out and see the single, odd elderly kayaker ride the stillness.

Just over the running path from the canal was the vast, majestic Potomac. However, kayakers are specifically warned here that they should resist that part of the water as it leads towards a large dam with turbines turning the exact speed needed to dice kayaks like fibreglass carrots. 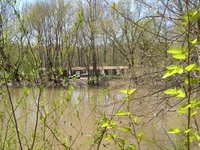 On an island in the river is another boat club. However it is very, very exclusive. More exclusive even than the one on the quayside next to the area where the suited and boated millionaires hang out. Despite looking like a shack on a deserted island, it takes years and years to even get on the list of people who might become members when enough people die. The island had no signs of life and can only be reached by a boat. Which means you have to have a boat already and therefore won't need this place. Although I think there's a little raft you can pull yourself across on. As nobody seems to use it and you cannot join it, I can only think it is some sort of front for something. Drugs, gun-running, government research or some other covert, illegal activity.

The evening was spent visiting more relatives in their large house in an estate of other large houses right next to a national park. It's the place to live if you think deer in your back garden are cool (which I think they are, but I don't have to live with them) and are fond of hornets (which no one is).

The whole basement is given over to a children's play area and has about the same volume as the house I grew up in. And I think the kids have as many toys lying around as I ever owned. This is apparently typical and goes to prove what I've always thought, that American kids are spoilt. Spoiled, plumped up and then shot sometime during their education. It doesn't feel like the best way to raise your kids.

On the way home, we passed a large corporate building that houses the headquarters of the NRA. One of the most important population control organisations in the US. It was closed, possibly because they were mourning the loss of one of their members. 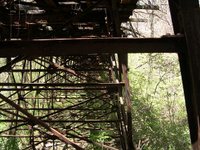 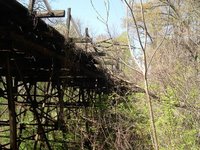 Posted by Peter More at 15:45
Email ThisBlogThis!Share to TwitterShare to FacebookShare to Pinterest
Labels: Anthropology, Food, Travel, US, Wildlife