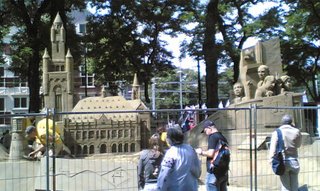 Despite its proximity and importance, I have rarely found myself in the city of Den Haag (The Hague). Den Haag is the seat of Government and home of the Queen. It isn't the capital and main tourist centre; that's Amsterdam. In between them is a large swathe of nothing much. Only an airport, Leiden (the town I worked in for about 6 years, on and off) and a lot of cows.

From the tram I got on at Den Haag central station, the first thing of note I saw was a building with a high fence and military-style policemen. It was obviously the US embassy as no other building in the Netherlands is as protected as this. In fact, nothing is ever as well protected as a US embassy. Even Bond-villain bases are easier to slip into.

Adoring Amsterdam, as one does, one forgets that other cities in the country are also beautiful; also have great architecture; also could be lived in.

Today's piece of employment was to have my voice recorded for a forthcoming animation. I play a guitarist in a punk band (which is one dream come true) and a nerdy keyboardist in an electro-synth band (another dream, obviously).

I walked back because it was a nice day and I'd had so much fun recording the voices no tram could contain it. I passed great music shops, some very impressive sand sculptures and, once again, the US embassy. Of the two guards behind the fence, one was on the phone and the other engrossed in sending an SMS. Guards are so easy to distract these days. They weren't this slack in James Bond's day. 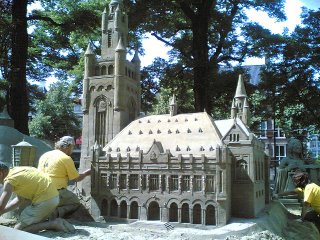