Over night were some of the brightest and loudest thunder storms we've had for a while. At least one burst was slap-bang overhead. Suddenly, sleeping on the top floor didn't seem so cool. But the storm passed and did not disturb too much of the short night.

In the morning, a light blue sky peered through a benetton of black, white and grey clouds. The streets, although puddled, were pretty dry. The storm had, however, left her mark. Due to a direct hit somewhere important, the metro was not running on our little stretch. It scuppered plans 1 through 8 for getting to the airport. We moved on to plan 9, which involved reviving the recently deceased using cosmic radiation. It was soon rejected as being too complicated for the time we had and we jumped in a taxi.

Our friendly taxi driver dropped us off at the heart of one of Europe's busiest airports on a pretty busy day. A melee of travelling souls, many resembling the recent deceased revived using cosmic radiation, stood in front of the Transavia counters. We were able to avoid the first throng because we had checked in online. I haven't quite understood the purpose of this for the airlines, but it can save you some time at the airport. Obviously we only missed the queue for the check-in area, but still had to queue at the luggage drop-off desks, which is in an identical area to the check-in area, but the queues are smaller. In theory the processing is quicker, but not by so much that you could do anything useful with the time saved.

This time there was extra processing because the flight was delayed. Somehow this meant that the seats we had selected online had been reset. We weren't able to change them at the luggage-drop desk we could have at the check-in desk, even though the girl presumably had the same computer system in front of her. Instead we had to go round the corner and petition another woman. Fortunately, we had to go and see this woman anyway as she had to give us a voucher to compensate for the fact our flight would be nearly 3 hours late.

The voucher was for the value of EUR 2.50, and next to a picture of a cup of something warm into which you could mutter. The following three boxes (for more money and depicting food items) were all unchecked to show you how concerned they were. I shouldn't complain. If you want to be treated like royalty, you shouldn't pay budget-airline prices.

Our mistake with the vouchers was to redeem them at Whorebucks where no coffee is as cheap as EUR 2.50.

Airports may once have been filled with happy, smiling travellers the way they are on the adverts for duty free (i.e. airport inflated) shopping, but not these days. Too many queues, too many delays, too many unforeseeable threats. Plus the glamour and rarity of it has long since gone. There is one group of people who do gad about with bright grins and playful demeanour. These are the ground crews who drive the carts that ferry around the old and handicapped. These buggies are basically golf carts, and always speed around the airport at a jaunty pace. There's no reason they should speed. Old or handicapped people don't need to be there any quicker, they just need to be there before the gate opens. No, the reason these carts speed around is because they can. Because they have license to speed through the crowds and through the spindly spider-arms that almost reach the planes like a royal chauffeur. 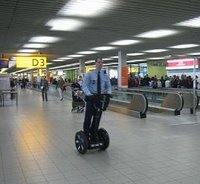 Almost as cheerful are the guys that go around on Segways, these space-age pogo-stick things on wheels. I think because there is some balance required and the fact they still look odd to most people, the drivers don't yet have as much fun as the buggy drivers. Its hard to be inconspicuous on them. In fact they conspick quite a lot.
Posted by Peter More at 14:58
Email ThisBlogThis!Share to TwitterShare to FacebookShare to Pinterest
Labels: Anthropology, Drink, Travel