zigzeggen - to speak like a politician
omzeggen - to chant repetitively
neezeggen - to be asked if something is possible that requires a change of routine.
Posted by Peter More at 13:00 No comments:
Email ThisBlogThis!Share to TwitterShare to FacebookShare to Pinterest
Labels: Language, Netherlands

One of the many forms of amusement (pun intended) provided by the American government is the narrow green one you have to fill in on your way to the US. It includes a section of Yes/No questions that begins as follows:

Now, I had to look up "moral turpitude," and I haven't even found an American who knew what it meant, either. It's such a 19th century phrase.
"Sir, I accuse you of moral turpitude, social impropriety and civil degeneration!"
It may as well ask, "Are you a cad and/or bounder; or are you considering committing acts of unnatural transgression against civilised, decent society?" It continues...

America's policy on crime does seem to expect foreign criminals to be extremely honest. And what exactly constitutes an immoral activity? If I was contemplating buying a copy of Trailer Park Sluts, is that an immoral activity? In some states, I'm sure it is. I had every intention, when there, of buying drinks for cousins, nieces and nephews of Catherine if the situation so arose. Even though some of them are 18, three years below the drinking age in many parts of the US. (Although three years above the average death by alcoholism age in some parts of Europe.) Is this an immoral activity? I think it could be. Was I thinking of making large drugs deals and using the money made to fund South American terrorists, is this an immoral activity? Actually, I believe it's an act of patriotism.

This is Spy Test number 1. If you tick YES, you are a very, very poor spy indeed.

This is terrorist test number 1.

"It wasn't really genocide, I was just a very active serial killer." No box for that.

I kid ye not. I can only presume if you reply YES to this last one, you immediately get hired into the Space Program.
I'm still waiting for them to add a new question. Do you have any idea where Osama Bin Laden is?
To my mind it just goes to prove America is all about entertainment.
Posted by Peter More at 08:50 No comments:
Email ThisBlogThis!Share to TwitterShare to FacebookShare to Pinterest
Labels: Anthropology, History, Language, Politics, Travel, War 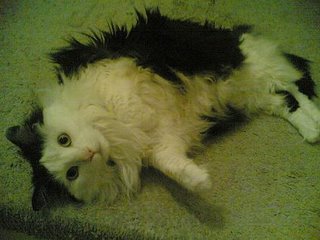 Following some considerable experiments, I have ascertained what are the top five cat predators in the wild:

Given this fact, if a van load of policemen were to burst in carrying drills and rustling plastic bags which they use to turn on the vacuum cleaner and flush the toilet, most cats would die of a heart attack.

Fortunately the likelihood of this event happening is roughly 1,456,335,544 to 1 and we are far more likely to get a cat President of the United States of America. Mind you, only a few years ago, these were the odds for a black or female president. So the bottom line, I guess, is your cat shows any political ambitions, don't stand in its way, because one day it could be the most powerful cat in the world, and then you'll be sorry. And if you do want to stand in its way, hire ten policeman to burst in carrying drills and rustling plastic bags which they use to turn on the vacuum cleaner and flush the toilet. 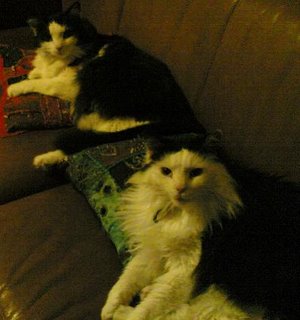