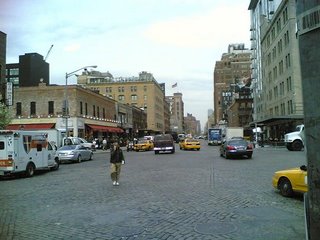 After a brief hunt to find unoccupied showers in Hotel 17, we wondered out into the streets. We broke fast on the covered terrace of a café on a corner not far from the hotel. I enjoyed the "typical American breakfast" of two eggs how you like, crispy toast, great, light-fried potatoes and a flat, round "sausage." All served with coffee in a mug the size of a house.

Inside someone with the mouth of Marlon Brando in The Godfather munched and mumbled through his own breakfast. Outside, in the corner of our narrow terrace, sat two guys who could have been Al Pacino characters. "What da fuck?" this, "why da fuck?" that. The guys were moaning "dat nowafuckendays it's too fucken expensive to fucken spend all night in a fucken jazz club." Possibly referring to the one that Woody Allen is reportedly to make unannounced appearances at and join in with the band. 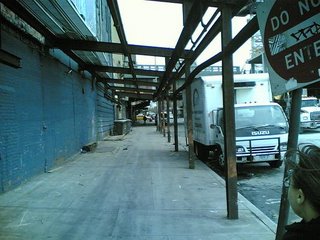 We went back to the hotel, checked out and did more walking. New York is a city where you can walk, which is not so common or possible in many US cities. We wandered all over the place finding ourselves pretty soon in the Meat Packing District where they used to, er, pack meat. Nowadays they are doing a lot of building there and it is a very up-and-coming area. In between the run-down bits, old-warehouses and rat-infested building sites, there are tiny exclusive designer boutiques of the likes of Stella McCartney, etc.

We then wandered down to Chinatown, which was great. In some places you really feel like you are in Shanghai or Beijing rather than New York. We had a fortifying lunch at Joe's Ginger and then picked up some tasty Chinese pastries from a bakery to have later on. It was odd to go all the way to one different country and find yourself missing a completely different third country. 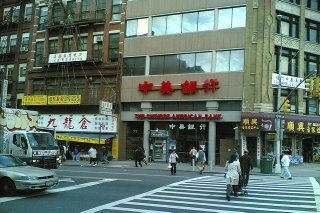 We wandered back to the hotel after that, skirting Little Italy and traversing Soho. We stopped for yet more kwarfee and a vegan molasses cookie. There we listened in on the conversation between a writer and his agent. She was all high-powered yadda-yadda-yadda and he was a bit more "well, er, okay." Agents and writers are the opposite ends of the spectrum and in many ways should never meet. However, they need each other like no other relationship does.

We grabbed our bags and had the concierge call us a taxi. The hotel has a deal with a taxi company that turned out to be a con. Or at the very least involves some poor communication. Basically the hotel tells you the fee up front, which is a little more than the standard fee to the airport, but you think what the hell it will come straight to the door. They even tell you it is all-inclusive. Then when you get there, the shifty guy in the taxi says that it is not at all inclusive. A few calls between the driver and the hotel later and we still refused to pay for the toll. Nobody was happy, but at least we were at the airport.

The journey there was terrible in another way. The whole journey we were subjected to "Smooth Jazz CD 101.9" an easy listening radio station playing songs so bland and inoffensive they give you road rage.

We arrived at the airport very early. US airports are much less secure than European ones. In Europe the shopping is on both sides of security and so you can shop knowing those people around you are fellow passengers. In the US, before going to the gates you are wandering around people who have just walked in from pick-pocket school or terrorist training camp. Basically, you go into a standard mall and then after a while, go through the security check to your gate. You would have thought that perhaps now, security would be allowed to interfere with business.

The other thing whereby European airports win is that there they provide free trolleys. In the US, you have to pay for them. Trolleys are part of the fun of the world of airports and to make you pay for them is just wrong. Morally wrong.

The flight back was uneventful as all good flights should be. I diverted myself with Happy Feet for a while, but I had been hoping there were things to be enjoyed in there for semi-adults to enjoy, but it was only for young kids. But fortunately we were able to sleep and soon found ourselves starting a new day, weary and happy, in home sweet home, surprisingly sunny Amsterdam. Stay safe.
Posted by Peter More at 23:41
Email ThisBlogThis!Share to TwitterShare to FacebookShare to Pinterest
Labels: Anthropology, Drink, Food, Travel, US