Let's face it, planes are obsessed with being boats. Cabin, crew, (air)port - most of the terms about them are nautical. This is despite the #2 rule of flying being “avoid the sea.” (#1 rule is “avoid the land.”) The roles on planes always also take their names from the equivalent on ships: Captain, first officer, steward(ess). Thus the head of the steward(esse)s is called the purser, as it is on passenger ships, referring to this being the person who keeps track of the money or holds the purse. Not because of how they hold their lips. 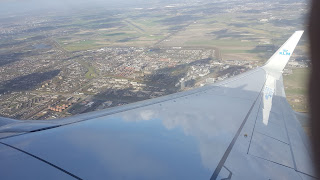 The purser on this flight gave the safety rigmarole in the style of a man seducing a woman in a 1960s British comedy. Which made us, the passengers, buxom secretaries. (As 50% of women were in 1960s British comedies. The rest were buxom housewives.)

It is as if what he is saying is all innuendo. But in fact it’s the same stuff you get told every time a plane is about taxi to the runway. He was audibly winking. That is you could hear the equivalent of a wink in his voice, not that his eyelids made a noise you could hear over the intercom. That would be have been weird, but somehow pretty entertaining.

“The life vest can be topped up using the mouthpiece provided.” *short creak followed by impossibly loud squish of eyelids colliding*

Seduction over, the passengers giggled girlishly. Or at least adjusted their seatbelts. It was time for the plane to hit the sky. Although, this time the sky hit back with the sky’s favourite prank, turbulence.

Turbulence is a great word. It usually makes me think of super-fast ambulance from some ancient TV serial. "Now, Turbu-lance! In color!"

In the end, the sky only had a little poke with its turbo-lance which really caused the plan to drop a bunch of metres just the once. My only disappointment is that as this happened, the purser didn’t cry out over the intercom “Ooooh! Did you feel that, madam?” But he didn’t and the plane flew on to modern-day .
Posted by Peter More at 22:37 No comments:
Email ThisBlogThis!Share to TwitterShare to FacebookShare to Pinterest
Labels: Me, Movies, Sex, Sweden, Transport, Travel, TV

Cats will scratch you;
Parrots just squawk;
Dogs attack you;
None of them talk.


(I urge you to read the the original and anything else by Dorothy Parker.)
Posted by Peter More at 15:55 No comments:
Email ThisBlogThis!Share to TwitterShare to FacebookShare to Pinterest
Labels: Cats, Poetry, Wildlife, Writing
Newer Posts Older Posts Home
Subscribe to: Posts (Atom)