For the second day running, we went shopping, which is the sort of thing that would put a strain on a lesser relationship. But today we had time to shop for books, which is a different sort of shopping. The sort of difference between a chalk sandwich and a cheese sandwich. We even had time to check out the geeky gadget store. 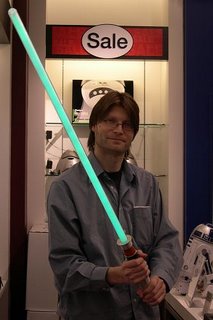 Possible captions: "The price tag is large on this one." The man who put the wan into Obi Wan Kenobi: "If you strike me down I will come back more paler than you can possibly imagine."

Again, however, we struck out (failed to achieve our aim) of finding clothes in Catherine's size that are also not covered in cartoon characters. I think it's time for a range of sexy clothes for the smaller girl. It could be called Lolita or something arty like that. Although we found nothing to buy, we did find a camouflaged bikini that could have slept four marines. I also found that the clothes racks in Seers from above look like swastikas.

In the bookstore (bookshop), I searched amongst the large collection of crossword books to find one that contained cryptic ones. Catherine did warn me that there wouldn't be any, but I didn't believe it. They seem to be a European thing. Hard US crosswords just refer to less well-known synonyms or expect you to remember obscurer facts like who was the 41st president or something. In fact, while we were there (the US, not the bookshop), Professor William J Clinton, former incumbent at the Lewinski Institute, published what appeared to be one of the first semi-cryptic crosswords in the country. It was more of a quiz with obscure-sounding questions, such as "Baby Boomer blown by girl in blue dress. (4,7)"

That night we ate Vietnamese and had my taste buds awed. We also did some late-night book shopping. I realised that although Virginia lags behind Texas in the sheer number of Bibles on the shelves, it does win on the number of Christian Inspiration books. These are books such as "Faith in Your Daily Life," "How I Found God in Clothing Retail," and "Jesus and the Art of Motorcycle Maintenance."
Posted by Peter More at 17:35
Email ThisBlogThis!Share to TwitterShare to FacebookShare to Pinterest
Labels: Anthropology, Fashion, Food, Travel, US