Ain't Nowt as Queer as Cowfolk

All this talk about cowboys put me in mind of the Lone Ranger. The Lone Ranger summed up the typical cowboy attitude to Indians. Or Native Americans as they call themselves now, I think to stop people asking them for curries. Even though the Lone Ranger had a sidekick - a very capable sidekick as I remember: the sort of Indian who could put his ear to the ground and tell you how many horses were going along, how far away and in what direction - he treated him terribly. For a start he called him Tonto, Spanish for stupid. There is no way the Lone Ranger would not have known this, as he would have encountered many comedy Mexicans during his time on TV. "Oh No-o! My seegar haas set fire to my sombreero!"
Secondly, he had a sidekick, right? A sidekick who was with him much of the time, right? Then why the Jeez was he called the LONE Ranger. He wasn't lone. He had a partner, sorry, sidekick. With the emphasis on the word 'kick' it would seem.

One more question: does a gay cowboy have a same-sex pardner? 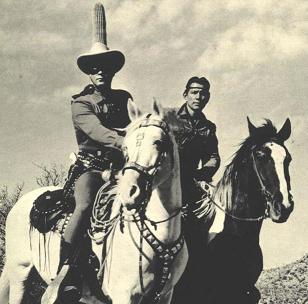 "My name might be 'Stupid,' but at least I would never wear a cactus on my head."
Posted by Peter More at 19:47 No comments:
Email ThisBlogThis!Share to TwitterShare to FacebookShare to Pinterest
Labels: Movies

Over here in Europe (or Yurp, as I understand it is pronounced), we have a little difficulty understanding the fuss around Brokeback Mountain. It is hardly the first main-stream film to deal with homosexuality, although its predecessors are easily counted on one hand. The fuss is mainly because of the suggestion that cowboys can also be gay. Cowboys!

It seems to me that the image of the cowboy is one that many Americans have of themselves. That they are a nation of untamed individuals together trying to forge a life on a new frontier surrounded on all sides by hostile Injuns (whoever the current Injuns happen to be) out to git’em. These days this is far from the truth, even the surrounded bit. Yet this image explains the prevalence of off-road vehicles in built-up areas.

The fact than any all-American cowboy could be in anything less than a red-blooded, straight-shootin’, straight-lovin’ heterosexual, is abhorrent. Meanwhile in Yurp, we have always had our suspicions about the sexuality of cowboys.

All that tight jeans, boots, leather, spending so much time out on the prairie together, a bunch of men camping out under the stars, hands never that far away from some sort of phallic weapon, etc. Cowboys also traditionally get very angry at these suggestions, which is the first sign of a repressed sexuality.

So over here in Yurp, the question is not “Why would they make a gay cowboy film?” But “Why haven’t they made one before?”

John Wayne (real name Marion) definitely walked like a man who had spent too much time in someone else's saddle. Any what is more exciting to gay men than a mysterious, silent stranger? Like that of Clint Eastward's character in "A Fistful of Dollers," whoever Dollers is.

"Are you laughing at my donkey?"
"No, signor, I was checking out your ass."

And how those clichéd lines would have been improved...

"This bar ain't big enough for the two of us. Shall we go next door, they have some intimate booths in there."

"Sundown, at the old cemetery. And bring a friend."

In fact there was one time Hollywood let the underlying homosexuality of cowboys shine through and that was "Paint Your Wagon." But it just went to show that cowboys aren't the type of gays who are into showtunes. Hollywood misfired.

Of course now this film is a success, get ready for a deluge of gay films. Hollywood isn't really one for breaking down social barriers, but it knows a bandwagon when one trundles past festooned with multicoloured sequins. Although I am not expecting any time soon the movie, "Mohammed: My Gay Life."

Suggested listening: Cowboys Are Frequently, Secretly Fond of Each Other by Pansy Division and now Willy Nelson.
Posted by Peter More at 10:04 No comments:
Email ThisBlogThis!Share to TwitterShare to FacebookShare to Pinterest
Labels: Anthropology, Art, Europe, Movies, Religion, US

Last year's birthday was memorable for my drinks party being me, a couple of guys and about a dozen women. Guys were pleading with me not to leave bars with my harem and my ego was soaring like an eagle surrounded by a dozen eaglettes. This year, I knew it was folly to try and recreate the experience. Especially as all my guy friends now knew I was such a babe magnet. (See, ego is still up there.)

This year, I think just as many women came as last. But now the genders were a lot more equal, which made for a nice big group. It was all very fitting as last year I was single and girlfriends always have objections to you being followed around by a large group of women.

One highlight was being sung Happy Birthday in half a dozen different languages, one after the other. French, Italian, Spanish, English, Dutch, Chinese and Welsh, to my poor over-Guinnessed memory. I remember Irish as well, but I think that was just the Guinness singing.

Actually it is unusual these days to have Happy Birthday sung to me on my actual birthday. Over the last six months there have been numerous occasions where for no reason that I can recall people have sung Happy Birthday to me. One evening it was sung so many times in an Irish bar, the table next to us had a whip-round and gave me 10 Euros as a present. Alas my conscience, that most irritating of all the voices in my head, made me give it back.

In future I will only listen to that voice that infrequently says, "you are a babe magnet."
Posted by Peter More at 15:06 2 comments:
Email ThisBlogThis!Share to TwitterShare to FacebookShare to Pinterest
Labels: Anthropology, Language
Newer Posts Older Posts Home
Subscribe to: Posts (Atom)