Every meal today came with a side-serving of Anniversary cake. That is, except the one we had in the evening at David's, who does very tasty things with fish. Obviously when we came home we had cake.

It was a typical day after, but without the hangover. Not too much happened. A trip to CVS, which like most American pharmacies (chemists) is the size of a large supermarket. We rounded up the day with a big sibling and sibling-in-law pool tournament.
Posted by Peter More at 12:35 No comments:
Email ThisBlogThis!Share to TwitterShare to FacebookShare to Pinterest
Labels: Food, Sport, Travel, US

I spent much of the day digitally scanning old slides from the 60s and 70s and ripping music from the 50s and 60s. It was clearly what you call a retro day. I remember thinking that as I sat there in my spats and zoot suit.

What wasn't retro was the edible bouquet that arrived in the morning. In these "Hard Financial Times" (as I believe the newspaper is now called), people consider flowers somewhat extravagant, not having a practical value. So the new thing is fruit in the shape of a bouquet of flowers. The fruits are peeled and shaped and stuck on plastic sticks. This being the US, some fruits are covered in chocolate. I'm not knocking it. In fact, the banana covered in black and white chocolate won several Saliva™ awards or the Droolies™ as they're known.

The county where Cath's parents live is dry. This doesn't mean arid, although Texas is somewhat desert-like; it means alcohol is not for sale. Anyone who wants alcohol and time, day or night, has to get in their car and drive as far as the next county. Although, in fact, the local law was recently relaxed and it is now possible to get some alcohol at certain places and times, although I'm not sure of the specifics. This was fine by me as I was using this week to have a rest from the old short-sighted devil called alcohol. It was a scheme that lasted nearly a week after I got back to Amsterdam.

The reason for all the earlier retro activity was that we were celebrating Cath's parents' 50th anniversary. There was a party, held at a nearby hotel. There was a bar, but it was not a bar-partaking group. Many of the kin being god- and beer-fearing folk. I can't say as I have ever been to a gathering like this where someone didn't get drunk, so that was a novelty.

There was a toast and everyone was given Champagne glasses. What was in the glasses was not actually Champagne, but cider. And it was not actually cider, but what Americans call cider, which is really fizzy apple juice. Even so, people had to be told this, as there was some concern that it was alcoholic. The uproar had they been told it was Champagne and they must drink it would be nothing compared to the uproar at a British wedding were they served alcohol-free fizzy apple juice.

The party had a lot of speeches and reminiscences about the happy couple, most often about how helpful and supportive they were. In Cath's family there are a lot of people who have seen and done a lot and paid witness to great social changes. To me it's a history lesson every time they get to speak.

The downside of many people being older is that they don't stay up late and party like they used to. Although for jetlagged people always looking for their next bed fix, that's not necessarily a downside.

We chipped in a bit to make sure the bar staff got some tips for the night. It's quite normal in America for bar staff not to be paid by the venue, but by them receiving the tips. To European eyes, it seems morally suspect, but Americans are generally happy with it as part of their culture as they tip almost everybody. I've put a jar by the bed just to see how strong this compulsion is in Catherine. Not very, it seems.
Posted by Peter More at 19:00 No comments:
Email ThisBlogThis!Share to TwitterShare to FacebookShare to Pinterest
Labels: Anthropology, Drink, Europe, Fashion, History, Music, Travel, UK, US

The main reason for our wee trip to Texas was to help celebrate Cath's parents 50th wedding anniversary. They've been married for longer than I've been and seen a lot of the world as well as some big shifts in the American socio-political landscape.

Unfortunately, preparing a shindig of this importance requires an awful lot of shopping. Fortunately, the US is a country designed around the concept of shopping. We went to Sam's Club which is a kind of wholesale warehouse where members (who pay the nominal joining fee) can buy anything from CDs to cakes. The Sam in question is the founder of Wal-Mart.

We next took in a pet superstore (the size of a large human supermarket in the Netherlands but just selling stuff for pets). Cath bought various cat-related things whilst I checked out the snakes and lizards. As ever the snakes and lizards were adorable. They sat in tanks surrounded by cheerily chirpy crickets. The crickets were of course oblivious to the fact their sole purpose in this new environment was to be a tasty treat for the reptiles. No lunch ever sang so contentedly.

Ourselves, we lunched at Schlotzsky's where they do Jewish-deli-inspired fast food. Every fast food place has to have a gimmick and Schlotzsky's is that is sells things like what a Jewish deli would sell, only made quicker and with more salt and sugar. The Mexican wait-staff only added to the air of authenticity.

Next we trawled around hobby and craft shops in buildings the size of aircraft hangers. The sewing and knitting sections of some of these stores are bigger than whole craft stores in the Netherlands.

In Hobby Lobby, whole shelves were given over to carved figurines all of which carried a label stating "for decorative use only." Really? What other use could there possibly be for them? I can only assume these were added after the store lost a law suit in favour of someone who tried to use one of their decorative objects for a dangerously functional task. The American legal system is a sort of Robin Hood apparatus, taking money from rich stores to give to the poorly intelligenced.

One quarter of the Hobby Lobby seemed to be given over to objets d'art that were inscribed with one of the following words: "Dream", "Hope" and "Faith." Apparently it’s a common thing in churches to have banners and things inscribed with similar things. Had there been one indefinable thing on which were carved large letters spelling "Object," I might have been tempted. But a box that says, "Hope?" What on earth would be in there. Now a little, black telephone book inscribed "Hope," that might sell. 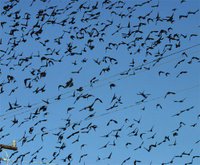 Everywhere we went, we encountered black crow-like birds. They seem to like to stalk around car parks. Or it may just be that in Texas the place you spend most time outside in is car parks. Anyway they do a lot of wandering around car parks, cawing noisily and threatening to gang up and menace in a Hitchcockian style.

Church of the day (seen on a sign on the side of a pick-up truck): "Shiloh Cowboy Church." I know nothing about this church, but I have a very vivid image of what the congregation and services look like.
Posted by Peter More at 09:44 No comments:
Email ThisBlogThis!Share to TwitterShare to FacebookShare to Pinterest
Labels: Anthropology, Food, Netherlands, Shopping, Travel, US, Wildlife
Newer Posts Older Posts Home
Subscribe to: Posts (Atom)