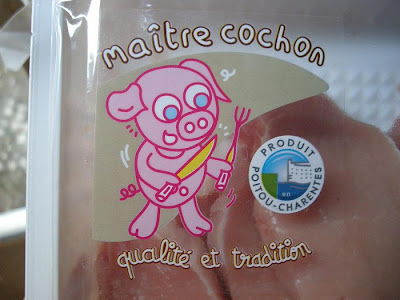 If anything demonstrates the porkular paradise that is much of France, it is this illustration from a packet of pork chops. It shows a pig all excited with a knife and fork in his trotters. Unfortunately, I think he didn't quite understand what was said.
Posted by Peter More at 13:14 No comments:
Email ThisBlogThis!Share to TwitterShare to FacebookShare to Pinterest
Labels: Food, France, Movies, Sex

It's 3 am. Having been soundly asleep a short while before, I answered the screams of distress of a loved one. Armed with only my trusty sandal, I crushed her assailant and a couple of innocent bystanders. I say assailant, but really I mean centipede that happened to be hanging about nearby when she put her light on.

To go from deep sleep to savage killer in a few seconds leaves a man wired. So as my loved one thanked me and quickly dropped back into that same solid sleep I had recently enjoyed, I sat up, buzzing, unable to retain that state for a good while.

As ever, no rest for the heroic. 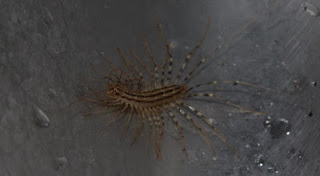 One of the problems with my Dutch is that it sounds better than it is.  I have a good accent, however I don't have the vocabulary to back it up. Consequently people speed on a dime a dozen assuming I'm fluent and leave me trailing behind trying to work out what a watjenoemhet is and whether not knowing it is important to everything else being said. I'm a long way from fluent. I do understand quite a bit, but people frequently throw words in that I can't fathom. Words like "doorgronden."

What happens even more is that I'm speaking and I can't remember, or simply never knew, the Dutch word for something. I have, however, developed some tools to deal with this.
The rule of thumb with Dutch is that if a word looks the same as the English word, then it is pronounced completely differently. But knowing a few simple pronunciation guidelines will allow you to remanglify the word into Dutch.
(There is a corollary rule that states that if an English word and Dutch word sound the same, then, when written, they bare almost no resemblance to each other, for example: "fluent" and "vloeiend.")

Most Dutch people speak English at a level I will never attain in Dutch. Plus when Dutch borrows words from English, it pronounces them almost the same for a few years before it remanglifies them. So the second method is to simply say the word the English way, and I usually revert to my native accent. It's remarkable how well this also works.

The preferred method the Dutch use for getting a new word into their language is to make one up out of existing words. Thus ziekenhouse is hospital (literally, sick house), and wapenstilstandsonderhandelingen (supposedly the longest word in the standard dictionary) is cease-fire negotiations (literally, weapon standstill under-handling). So the third, and most fun, method to guess the Dutch word is to consolidate shorter words that describe the thing in the hope that it is correct or conveys enough of the meaning to work as a substitue word. Thus if you don't know the word for envy, you could try translating "stuff-want-ness" or "ox-covet-ism." You'll probably be wrong, but you'll amuse the listener and, if you're lucky, they might even think you're Belgian.
Posted by Peter More at 15:57 1 comment:
Email ThisBlogThis!Share to TwitterShare to FacebookShare to Pinterest
Labels: Language, Netherlands

I have discussed before the French attitude to driving. The French drive like tomorrow is for wimps and today is the last day of the rest of their lives. As the very French Philosopher Descartes put it, "I think, therefore I am; I drive, therefore I probably won't be much longer."

In driving down the small roads of rural France, one meets two classes of "other road users." Those who drive three times slower than you and those drive three times faster than you. The former is usually a nonchalant, sun-weathered rustic driving some enormous piece of farm equipment; or it's a little, old couple on holiday from somewhere outside of France. Little, old, French couples are so surprised they are still living, they speed along the narrow, country backstreets like aging bats out of Old Peoples' Hell.

So while us tourists grip the simulated leather of our vehicles as we scoot along, not wanting driving on a French road be the last thing we ever do, the French are content in the knowledge that, at some point, driving on a French road will be the last thing they ever do. So once again the French win on philosophy, even if that philosophy is "Drive fast; die young."
Posted by Peter More at 11:14 No comments:
Email ThisBlogThis!Share to TwitterShare to FacebookShare to Pinterest
Labels: Europe, France, Philosophy, Transport, Travel

Finally found a French book at my level.