Proud to be a Remoaner

Brexit has literally split the country in half. It's split political parties. It's split families. It's split past Teresa May from “holy crud, I'm in power!” Teresa May. There hasn't been such a divisive thing in British politics since the whole Cavalier v Roundheads thing. 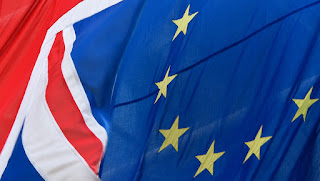 You can probably tell something of my position on all this from the title, but both sides have their nuances.

I'm a Remoaner. And pretty proud of it too. I know Remoaner is the derogatory term from the “other side,” but it is one that is easily reclaimed. I quite like it as a term. It's a cute pun and there is some truth in it. We Remoaners do a lot of moaning. Which is not a bad thing. There is nothing more British than grumbling about things. We love to carp on about things don't think add up, don't feel right and are being handled in a very slipshod fashion. We especially like to complain about things we seem to have no control over, such as the weather and sporting results.

The main thing I like to remoan about these days is the fact that a year or so ago there was a referendum where the vote was pretty much, within a margin of error and international interference, 50-50. It was NOT a landslide. It was definitely NOT a clear mandate for anything. It's at best a slight preference. And although governments can lead with such a small majority, said government will only affect the next 4 years and then we can sling them out. Yet the result of the #Brexit vote is talked about as if it the referendum a massive landslide. As if the whole country voted leave. Instead, of those who voted and expressed a preference, just over half said “yes lets do this thing, whatever it is.” Sure it was a win, but the real truth the poll told was that this issue divides the country down the middle and getting bolshie about it from either side will annoy a lot of people.

I partly because the win was so flimsy (and so rooted in the time it took place) that those who really want it, are so desperate for it to happen soon, before more people change their mind. They get so angry when it is questioned.

I have an extra thing to remoan about. I was not allowed to vote. No kidding. At the time of the vote I was living abroad. By the rules of the referendum, I had been out of the country too long. (Note this rule does not apply to general elections.) Me, for whom the whole in or out of Europe thing has a direct relevancy. My ability to live and work abroad, or at least the ease of it, hinged on us being in and I was excluded from that decision. And not just myself but a very large number of people were in the same boat. Enough to sway the pretty close-run vote, by several accounts. Now, that IS something to remoan about!

So, I'm very comfortable with my remoaner label.

I was initially miffed there was no comic label for the other side. But actually there is. It's one I want to make everyone use, because it finally gives the remoaner label a counterpart: BELEAVER. I like it a lot. Why Beleaver?

BELEAVER because many of them proved they will beleave any old rubbish as long as it's written on the side of a bus.

BELEAVER because many beleave Brexit will fix all of the things they've been made angry about for all these years, which it patently will not.

BELEAVER because many of their number have an almost religious-like following of certain key figures. They make these people almost Christ-like figures. And by Christ-like, I mean they are usually people that for most people, when they hear about them, we go “oh, Christ!”

So go out and use Beleaver. Let's bring back an equality in the labels as there is in the numbers of people on each side if the people's poll from all that time ago is to be believed.