This was my first trip to Finland. Some 20 years ago, I flew Finnair to go to China, and did stop over in Helsinki airport for an hour, but airplanes and airports are not the soil of that country so don’t count.

The flight to Helsinki was pretty easy and the plane had the best new plane feature I’d seen for a while – video feed from outside the plane during takeoff and landing. During takeoff it was from a video at the front of the plane and once it was off the ground it was from looking down at the receding Earth. That was awesome. Because I prefer an aisle seat because I have legs, I only see the takeoff from the side through that part of the window that isn’t obscured by up to three other people. And it’s never as exciting as seeing pretty much what the pilot sees.

During the flight, they threw some sandwiches at us to keep us quiet. Because people always prefer either brown or white bread, the Finns had an interesting solution, biracial sandwiches. It’s not nearly as pornographic as it sounds. It was that the sandwich was made with one slice of white bread and one of brown. Everybody’s happy, right? Except those people who absolutely hate the other sort of bread. 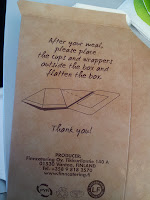 The sandwich came in a package that, after you’d eaten the contents, gave you instructions on how to fold it up. It was a flat-pack sandwich box. A kind of reverse Ikea principal. (Yes, I know Ikea is not Finnish.)

The second leg of the trip was on a propeller plane. It’s so rare for many of us to go on propellered planes that we get excited when we do. They somehow feel less safe, even though their principle of propulsion is based on creating a pressure difference so that the air pushes the plane forward rather than a jet which simply causes backwards-facing explosions.


The in-flight tourist and duty-free magazines reminded us that Finland is most widely known for it’s bringing to the world, two giants of popular animated culture. The first, the Moomins are basically affable, pale hippos who had lots of fairytale-like adventures.


The second? Angry Birds: the story of an aggressive, avian terrorist cell, hell-bent on destroying the pig way of life.