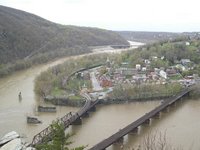 We awoke in the quiet, post-revolutionary, pre-tourist season Harpers Ferry. We were staying at The Anglers Inn, a quaint, friendly B&B obsessed with all things fishing (see previous picture).

We each enjoyed the luxurious, warm classic-shaped bath and went down to feast on the gourmet breakfast provided by the kindly inn-keepers. Sumptuous French toasts and light chocolate bread. A fantastic way to start a day and 8:30 doesn't seem so early when you're still on European time. 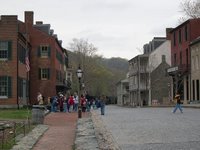 Harpers Ferry was a once busy town that is now a tourist village. It's full of picturesque colonial houses. It is about as full of history as a place can be in the US. Scene of three civil war battles and John Brown's failed rebellion to free the slaves, which is credited with causing the war.

However one of the first points of the day was the confusing world of custard. In the UK, custard is the milky, eggy gloop you put on your pudding (dessert). In the US, the closest thing to custard as we know it is called pudding. Although you can get "frozen custard" which is also similar, but less eggy and more frozen. It's very confusing, but even more confusing when you know that custard was originally a kind of pie and that pudding originally meant something like a haggis. Not so tasty now, is it? 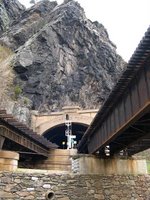 After breakfast, we took a walk. A long leisurely hike through the focal point of the village, over the railway bridge, along the damp canal and up through the woods. 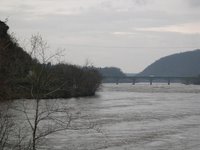 Harpers Ferry lies at the point where the Potomac and Shenandoah rivers meet. There's a little bit of friendly tussling between the two waters, but it is the Potomac that wins the chance to flow on and into the Chesapeake Bay. On the other side of the Potomac is a key hill three times fought over during the war of Gone with the Wind. 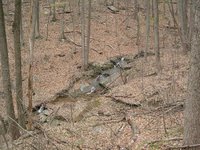 Along the paths that wind through the woodland on that hill are points of interest left from the fortification from it. Ditches marked powder store and indents posted as gun emplacements. We took the shorter path to a crop of rock overhanging the tunnel entrance opposite the town. It's a great spot to sit, reflect, and look down on a pretty town kept in the old style through the power of tourism. Being such a great spot, it was only after a few seconds of arriving that another pack of tourists turned up. Fortunately, their attention span was much less than ours. 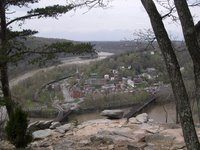 The overhang looks over the twin railway lines that merge at Harpers Ferry. We watched as a 65-carriage cargo train snaked its way along the river-side track and into the tunnel beneath us. Slowly crossing the country on a pre-laid path could well be the most boring or the most visually stimulating jobs one could have. 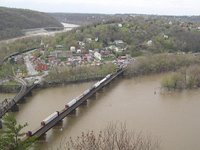 One thing we noted about the woodland around Harpers Ferry was its almost complete lack of wildlife. Occasionally there would be the odd woodland bird or a squirrel, but you'd expect much, much more of this sort of thing. It was actually quite eerie, especially as we saw more wildlife in New York City. 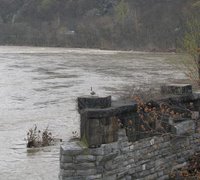 Most of the buildings in the core of the village are museums. Many of these relate to the life and times of one John Brown, former business man who went all wild-eyed and bearded at the treatment of slaves. He got together 20 men and lead an attack on Harpers Ferry which he hoped would encourage the slaves to rise up and join him. They didn't. Probably because despite his initial success he was soon surrounded by the military. Not only that but the first person the revolutionaries managed to shoot was a freed slave in the employ of the railroad company, which must have sent out mixed signals. That is if any signals really got out. It is hard to know how in these pre-radio days, word would really have spread about the revolt. Especially amongst slaves whose movements were far from free.

Still despite the failure of his attempt, and John Brown's subsequent hanging, the "rebellion" is credited with being a cause of the civil war a few years later, fought overtly over the issue of slavery.

Harpers Ferry was also a location of one of the first "free colleges," a place where people of all races and sexes could get an education. Together. Storer College was also a meeting place of the Niagara Movement, a group dedicated to removing segregation that was the "freedom" after slavery. You know as in, "Everybody is equal, but some people are more equal. White legs good; black legs bad."

After lunch, a few more museum homes and an encounter with a very large, blind park ranger who came puffing and grumbling down the stairs so audibly we thought he was going to die, it was time for coffee. We had it in The Coffee Mill. On the outside, this looks like a quaint, old-style coffee house, inside it looks like a seedy diner.

We didn't have time, alas for the John Brown Wax Museum in which the life of John Brown is illustrated using animated wax dummies. It has all the feel of a Vincent Price movie, apparently, especially the scene where John Brown is in his coffin and if you listen carefully you can hear him breathing, somewhat mechanically. It appears that frequently people come back to the town later in life determined to go back into the wax museum and once and for all dispel the nightmares they've had ever since they went there as a child. We didn't have time but maybe when if have kids of our own we'll come back here and take them here to the wax museum. 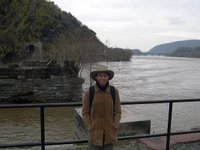 Harpers Ferry is a stop on the Appalachian Way, a path "originally" followed by Messrs Lewis and Clark when they crossed the country deciding what bits to con the locals out of. Much is made of Lewis and Clark's "pioneering" crossing and "discoveries" but very little is made of the young Native American woman who led them complete with child on her back.

We walked down by one of the rivers' edges where once there was much industry and housing before repeated floods brought all the buildings down. Now there is nothing but fallen brick in the outline of houses and mills with trees growing in between. Oh, and signs saying where the most important buildings were. On the way back we followed a tiny bit of the Appalachian Way. Some people spend years following the whole thing as a sort of get-back-to-well-trod-nature sort of thing as well as getting in touch with their colonial roots.

After a long day, an early night was the order of things, disturbed only by the frequent passage of 65-carriage monster trains.
Posted by Peter More at 16:01
Email ThisBlogThis!Share to TwitterShare to FacebookShare to Pinterest
Labels: Anthropology, Drink, Food, History, Travel, US