After leaving Harpers Ferry, we drove along the Potomac river, past places like Damascus and Germantown towards the Washington DC area. It's here that Catherine's sister lives with her husband. They live in the forest. Or so it feels. Actually they live in what was once a wooded area that is still pretty wooded even after houses have been built there. It's great if you like watching birds and squirrels and feeling miles away from the house just next door.

Traffic in and out of DC, especially during rush hour, is a nightmare. To help cope, at key times of the day, lanes change direction. Roads normally heading both in and out of the city suddenly start heading just one way. It can be very confusing. And frustrating when the place you want to get to is normally accessible by driving a little way down one road that is now against you and you have to drive all over town to get on that same road travelling in the other direction. It's also dangerous and we at one point found ourselves facing traffic coming head-on after none of us realised the road had gone all unidirectional.

Our detour took us past such sights on the DC tourist map as the Kennedy Center for Something or Other, and the Watergate Hotel famous for bringing the "gate" suffix into the English language. Now anything can become a scandal just by adding the word "gate" to the end of it. Like the scandal about the state of modern software practices, Billgate. 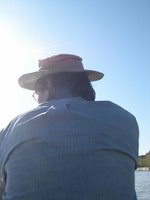 We were in DC to canoe. Yes, canoe. There is a boat club on the river in the heart, or at least kidneys, of Washington where our hosts keep a canoe. It's also a hang-out for a thousand spoilt school kids. We rowed around one of the islands giving ourselves a good, healthy workout. Then we hit the town.

We walked past the bars where the yachtists hang out. Here large slabs of ice had been placed on pedestals for reasons unknown. It was maybe artistic, but they were just somewhat rough slabs. It may have been to counteract global warming, but it seemed too little, too late. It may have just been decided by someone that it would look cool (pun possible intended). We strode up past pricey shops, walked right into a medium-sized Italian restaurant on the corner, sat down and ate.

The food was highly worthy, as I recall, and we returned towards our car quite nourished. The shops were all shut or shutting except for the bookshop, which had hours left to go. We wandered through the yuppie bar terrace on the quayside. The place was now heaving with the well-dressed and well-off, many of whom had arrived on expensive yachts which were parked along the waterside. It was very much a place to be seen. We slipped through effortlessly. Not really dressed up well enough to be obvious. The yachts varied in shape, but pretty much all of them were shining. I think people had spent their whole week at home polishing their yacht for this evening. None of them looked as if they had ever been sailed in anger.

{Lesson time: The word "yacht" (pronounced yot) comes from the Dutch word "jacht" (formerly "jaght", pronounced yagkgt where gkg sounds like clearing your throat or the ch in "loch"). It basically means hunt or in this context fast pirate-ship. So these people with their elegant suits and designer partners were basically fast pirates.}

We drove back past one of the must-see sights in DC – the steps from the film The Exorcist. You know, the ones where he falls down and down and down. Superb.
Posted by Peter More at 13:21
Email ThisBlogThis!Share to TwitterShare to FacebookShare to Pinterest
Labels: Anthropology, Food, Travel, Wildlife