Of Cats and Men 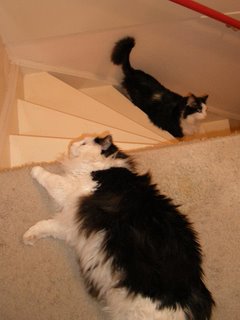 As I may have mentioned before since shacking up with Catherine, I am the step-owner of two step-cats. I come from a long line of dog people, so cats were somewhat new to me. I knew about cats of course; At least the stereotype of independent, resourceful, ruthless creatures beloved of crazy old women, that merely exploit humans for food and show only patronage masking cold disdain in return. Dogs are the opposite and show unfettered devotion from which they only sway to maul the odd small children.

Cath's cats were shelter cats. The shelter they were from seemed to give their charges the names of countries. The male cat is still called Borneo, but the female was originally called Iraq, which isn't a great name for a girl. Sher'll only get teased at school and called Eye-rack. She was renamed Tenzin, after the first man to climb Mount Everest laden with another man's stuff.

They are apparently mostly Maine Coon cats which are hairy little critters: black and white like fluffy racoons. These are not to be confused with Caine Moon cats which look like Alfie's Arse. (This was a topical joke in 1966. For kids under 15 who have seen Batman Returns, read "Alfred's Arse.")

Far from being the stereotypical independent go-getters, these cats are needy, greedy and weedy. Weedy because the list of things they are scared of is immense. From vacuum cleaners and flushing toilets to plastic bags and spoons. 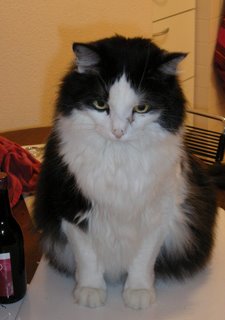 The list of what they like is: eating, sitting, sleeping, eating and playing with wool. When they are not doing these they are complaining that they want to eat or play with wool. Cats don't ask nicely, they can only mew irritatedly. In fact Borneo has a small language of about 8 sounds. All plaintive and irritable. This is not because they are American cats, in case that's what you're thinking, because then they would also have a "have a nice day" sound.

Even Tenzin, who is irritable, but normally silent has undergone a change recently. Since the rediscovery of wool, she has become a first degree wool addict. She needs her play and whines frequently to get it. I hadn't known she could make a noise until this painful little screechlet first emerged. It sounds like a word she picked up from Borneo.

Wool seems to be a sort of cat drug. From the moment Tenzin first got play of a strand of wool, she was addicted. For the first few days, she neglected her food, and now spends many of her waking hours pleading to have a fix. If she could steal to get a play on the wool, she most certainly would.

Cats do not understand mockery. Replicating their noises in exaggerated, mocking tones only makes them repeat their original noise. They do not understand that getting in the way of human legs means getting kicked or squished. No matter how many times this happens to them, they fail to understand that it was their action of moving in the way of the foot or leg in question that caused this kicking or squishing and regard you venomously as if it had been deliberate. I can honestly say, I very rarely kick the cats deliberately. I don't need to. Borneo spends 1/3 of his waking life getting in the way of feet. He thinks he's a feline football. Fortunately I have self control and have never to this date attempted to score a conversion (place kick) with this furry, fat ball. Although I can just hear his plaintive whine diminishing as he flies off through the open top window to score the full two points. 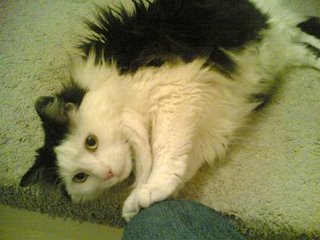 No cats were harmed in the writing of this essay.
Posted by Peter More at 09:29 No comments:
Email ThisBlogThis!Share to TwitterShare to FacebookShare to Pinterest
Labels: Anthropology, Cats, Netherlands, Sport, US, Wildlife
Newer Posts Older Posts Home
Subscribe to: Posts (Atom)