The gunman it is emerging throughout the day is not your average gun-toting local, or a single-man cell of al-Quaida as some panickers were fearing, but a Korean student. He seems to have integrated very well and owned at least two handguns.

When she sees the skyline of Dallas, Catherine cannot help but think of the theme tune to the TV show of the same name. I hear something, but my memory is poor and I have a strong feeling I am not hearing the right theme tune. It may well be for some similar show, maybe Dysentry or Maverick. My memory of the show is pretty hazy, but I do recall there was a big hoo-har about who shot JR. I'm pretty sure it was Suellen Oswald from the Children's Book Repository. It was a pity we didn't have time to replenish my memory at the museum out housed at the actual Southfork Ranch used in the show. I say pity, but I mean something else.

One thing Dallas isn't short of is churches. They're big, they're frequent and they all have long names. Where I'm from, churches are called St. Margaret's or St. Frederick's. Maybe they get as long as St Martin's in the Field, but that's it. Here they are called things like Holy Church of Jesus Christ Son of God, and Church of the Holy Blessing of Jesus upon the Children of the Wondrous Flock of He Who Must be Praised. I don't know if the trend will be for these names to get longer. In fact, I think the trend will be that they start becoming more commercialised and start being called things like Holies!, HisHouse or J.C. Superstore ("open every Sunday from 8 til 4"). 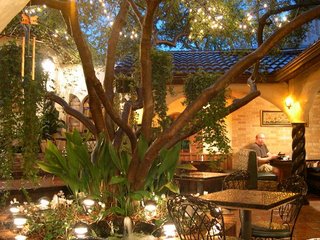 We had planned that evening to go to Billy-Bob's three-acre Honky-Tonk and Rodeo in Fort Worth, but time slipped away from us like the soap in a hillside shower. Then storm warnings came in so we decided to do something a little closer to home. Plus going to a bar to look at a bunch of men in big hats and leather boots seemed a little gay. Instead of the Honky-Tonk and Rodeo, we did the next best thing in terms of experiencing the Wild West spirit. We went to a Hari Krishna Temple Restaurant. There we had a very healthy Indian vegetarian buffet followed by some great halva. And the people in these temples are really nice. They're like Mormons dressed as Indian Hippies.
Posted by Peter More at 13:49
Email ThisBlogThis!Share to TwitterShare to FacebookShare to Pinterest
Labels: Food, Religion, Travel, US