Not many people realise St. Peter (or San Pi Ta) was Vietnamese. In fact only a handful are even aware there were Vietnamese Jews in Israel in and around 0 AD/BC. What we do all know is that AD/BC was the rock band that Peter fronted. It's not mentioned much, but when Jesus said, "Peter, you are my rock," he actually screamed it out from the front row of the Jerusalem Amphitheatre (now the Cellcom Arena).

First port of call for today was a pleasant, well-run nursing home currently housing one of Catherine's relatives. It's usually hard not to be depressed around nursing homes, but this place does almost everything to make itself seem like a hotel. Except that most of the staff dress like nurses. Mind you, many people would pay very good money to stay in a hotel where the staff dress like nurses.

Lunch was ambushed at Spring Creek Barbeque. Here there were several options for getting your food. You could shuffle along the canteen-style line to pick out what you wanted; or you could stand at a desk and request it for take-away from the smiley lady. There was also an extra stand selling "cobblers." Cobblers are a kind of filled dumpling. If you're British, never has "carry-out" food been so "Carry On."

In-restaurant music was provided by a CD of Christian rock. For those of you who don't know Christian rock, this was a highly typical example. It was bland, country-tinged AOR (Adult-Orientated Rock) with choruses of the sort that go, "Jesus is alive!" with a portion of the gusto that other bands use when celebrating women who "shake." No matter what your views on religion, it's safe to assume Jesus deserves better than Christian rock. Most bands are very pale imitations indeed of the legendary AD/BC.

The middle of the day was devoted to golf, the gentleman of sports. The only sport that comes with its own special buggy (except, of course, buggy racing) and where you have the chance to see bobcats (except, perhaps, bobcat buggy chasing). I was very pleased with how it all turned out. My previous experience with golf had been limited to knocking balls about as a way to get out of more physical sports at school and a couple of practice rounds over the years. But I still remembered how to swing that stick and thwack that ball in roughly the right direction and for a reasonable percentage of the distance required. Not quite Tiger Woods, but perhaps Pussycat Bracken. 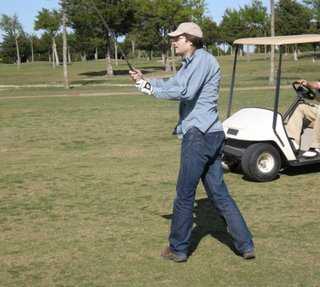 If TV ads are to be taken as showing what Americans think they need, then the answer is: cars and medication. In fact the number of car ads is down since the auto industry rolled over the side of a cliff and burst into flames. Of the medications, very popular seem to be Viagra and "Cialis," which I only know about from my email box.

America has come a long way and I never thought I'd hear the words "erectile dysfunction" in the middle of the day on a US TV station. Not that I really wanted to. The "erectile dysfunction" ads show a lot of men older than 30 sitting on sofas with women and talking. And thus by implication, not having sex. In fact, had the announcer not said the words "erectile dysfunction" you wouldn't have guessed he was hoping for sex, except for the fact he was a man alone with a woman. There is nothing suggestive of the situation except a mild sadness in the couple's eyes. In Italy, no doubt they have a cartoon penis to advertise these products who starts of flaccid and out of breath. In the US, this would cause heart attacks and riots on the street. My campaign for Viagra would be hosted by former cartoon dog, Droopy. He would be perfect for the role. There's almost certainly a cartoon where he drank growth serum.

Dinner was had at Chedders a chain of restaurants that are pleasantly decorated but frequented by noisy people. The food is the usual sweet, salty fare. Even the carrots were sweetened, which is a crime against humanity. Or at least against veganity, which I'm sure is nearly as bad. They had music in the background and, guess what, Chedders plays pop. (You have to be British and over 30 to appreciate that joke.)

In the evening we visited Cath's spirited Aunt Vora, who lives in one of those neighbourhoods with faux-wooden bungalows on each plot.

I was told not to walk on the grass because of things called chiggers. Chiggers are local-grown little critters that live in the grass but prefer skin. They cause itching and rashes and things like that. Nobody seemed to have a good word for them. There ought to be a joke about the sort of music they play, perhaps only suitable for Brits over 30, but I can't think of what it would be.

On the subject of music, I'll leave you with a tune that was following us around on the radio waves this trip. It's something like New Wave Electro English Beat Queen Gary Numan Pink Floyd. Ladies I give you Late of the Pier with Bathroom Gurgle: http://www.youtube.com/watch?v=MYuwGGqd0y4

PS Of course, right at the end should come the set-up for both the jokes in this entry: http://www.youtube.com/watch?v=X4TmQxLjELI Glorious!
Posted by Peter More at 09:24 No comments:
Email ThisBlogThis!Share to TwitterShare to FacebookShare to Pinterest
Labels: Food, Music, Religion, Science, Sport, Travel, TV, UK, US
Newer Posts Older Posts Home
Subscribe to: Posts (Atom)