I hope 2011 is so prosperous for you, signs like this will be commonplace. 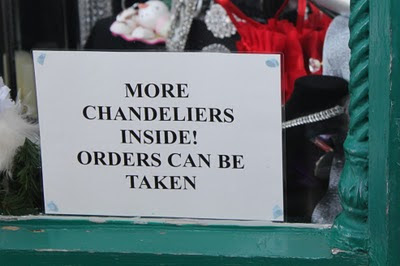 'Tis the Season to be Golly

Fluffy tufts of snow linger in the air deciding where they will look the best. Many decide the most advantageous place is the edge of my gloves where they transform from being crystalline cotton to cold dampness. But I don’t care; I'm cycling through a postcard. The old houses and timelessness of any body of water makes the postcard resemble a reproduction of an Avercamp or Koekkoek. (If only my bike wasn't so modern and stylish.) There's no denying it's winter. Christmas is around the corner and tomorrow is Sinterklaas. Sinterklaas is the grandfather of Christmas; the Dutch day of present-giving which was transformed into the one we what we know in the UK (and US). The transformation occurred by turning a shoe into a stocking, a bearded, red-wearing bishop into a bearded, red-wearing kindly old man and an army of "Moors" into elves and reindeer.

The "Moors" are the hardest thing to get used to. Everything else is cute and understandable, but I escaped 1970s Britain to avoid ever having to see a white guy blacked up and the sight of "golly wogs" in shop stores, only to find all of that turns up once a year in a supposedly liberal country.

I'm at the point where I'm no longer disturbed by the representations of Zwarte Piet (either in doll form or in the form of a guy with boot polish on his face), but still fail to comprehend it. According to Wikipedia (the Wikileaks of semi-truth), the Zwarte Piet character was originally the Devil (enslaved by Saint Nicholas to help him deliver presents), but evolved to become a black slave, which is no less disturbing.

More recently the slavery elements of the tradition have been attemptedly excised. It is hoped that it is less controversial if the Zwarte Piets are merely "travelling companions" of Sinterklaas. However, is it really less controversial for a bishop to spend most of his life holidaying in Spain accompanied by dozens of much younger, dark-skinned men? Especially a bishop who once a year sails up to the Netherlands with his young holiday chums, showers the good local children with sweets and gifts and kidnaps the bad ones and takes them back to Spain.

It's no wonder a few details got changed in the evolution to Santa and Christmas. Although it's not clear where the tradition that Santa is an alcoholic came from. But I assume that must be what replaced the holidaying in Spain with young, black men.
Posted by Peter More at 00:35 2 comments: Links to this post
Email ThisBlogThis!Share to TwitterShare to FacebookShare to Pinterest
Labels: Christmas, Europe, History, Netherlands, Religion
Newer Posts Older Posts Home
Subscribe to: Posts (Atom)