At this state of my life, things have transpired to give me two French holidays a year. One in the millionaires' playground of St. Tropez, the other in the French region of Nullepart Centre (i.e. the middle of nowhere). My parents, some years back, just before it became trendy and a several years before it became passé, bought a set of tumbledown French farm buildings with a view to making them habitable enough for an occasional summer residence.
Over the years, much time and effort has gone into making these buildings habitable, and now, many years later, a couple of them are. Although most of the structures retain their tumbledown charm.

Living there, you must first get over any qualms you have of cohabiting with nature. You must embrace "l'existence rural" (which I just made up). Not only does the surrounding countryside teem with wildlife, but so does the house. The house is occupied by flies, wasps and moths; a hundred varieties of spider (from large to superlarge, which live off the above); and several sizes of alien centipede things (which apparently eat the spiders). Not to mention edible dormice which will you will hear more of soon.

And I haven't even begun to mention the wildlife outside, including ants, grasshoppers, crickets, bees, hornets, butterflies, frogs, slugs, bats, beetles, lizards, snakes, deer, glow worms, owls, pigeons, pheasants, and all manner of other wild things.

As well as this wildlife, there is some tamelife. My parents have a couple of chickens which spend their time scratching around the ground and once a day yodeling to announce the arrival of a new egg. Forget your dogs, cats and newborn babies, chickens make the best pets. They have personality, curiosity and form a close companionship which breaks down the moment food appears.

There are also sheep in one of their fields (courtesy of a local farmer). Sheep are awesome. Forget your prejudices, sheep all look very distinct from each other and have very different personalities.

And, of course, there was my parents' faithful, aging dog, Marley.


And to add to all of this, we brought our own cats, just in case there weren't enough creatures lying around. The cat's story, I'll tell soon. In fact, pretty much every one of the creatures listed above will get its own story. Oh, and there will even be monkeys.

Posted by Peter More at 23:16 4 comments:
Email ThisBlogThis!Share to TwitterShare to FacebookShare to Pinterest
Labels: France, Me, Travel, TV, Wildlife

Five stages of being drink on the internet

Light Entertainment; or the Haynes Guide to French 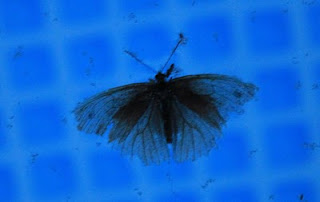 French is one of those languages where if you know a little, it's not enough. A little bit of French will usually be enough to lead you in totally the wrong direction. A good example is something that appeared on a recent garage invoice:

Now a little bit of French will tell you this must have something to do with the lights.

Answer: It's the distributor.

Because we went through this process, I will now not forget this for a long, long time. Probably not until just before I next need it.
Posted by Peter More at 01:23 1 comment:
Email ThisBlogThis!Share to TwitterShare to FacebookShare to Pinterest
Labels: France, Language, Transport
Newer Posts Older Posts Home
Subscribe to: Posts (Atom)