The drive to the Ronald Reagan National Airport (usually the Ronald Regan is dropped) took us past such important spy-novel locations as Langley, Virginia (headquarters of the CIA) and The Pentagon (headquarters of The League of Satan, judging by the design). Most of the people who go on to become enemies of the US are trained by people from these places.

From the airport, we took a moving walkway, a shuttle bus and a moving walkway to get to the metro, which we rode to Union Station in Washington itself. I'd forgotten how soporific the lighting was on DC metro stations. I'm sure violence on the subway is very low there, although incidents of people falling asleep onto the track must be pretty high. We arrived a good hour early at Union Station, so had a chance to grab food and see the resplendent décor.

We took the Amtrak train to New York Penn Station. A pleasant three hour ride with more space and less panic than on a plane, but for only a tiny little bit more money and much more travel time, but much less faff time. 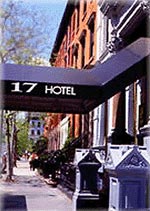 At New York Penn, we jumped in a taxi and were swerved over to the East Village to the deceptively large Hotel 17. After flooding the toilets, we roamed around the streets hunting down healthy, dairy-free places to eat before settling on a Chipotle's Mexican deli. We walked pretty much the whole day acquainting ourselves with a small part of the world's best-known metropolis.

The evening was rounded off with "Harold Night" at the Upright Citizen's Brigade. UCB are one of the best-known improv groups and is an improv academy in the style of Second City. The show we watched was basically 5 different groups all performing a Harold (short, semi-structured, improvised performance of about 20-30 minutes). The audience was mostly other performers or students of the many classes they give. It was never-the-less practically full.

UCB's theatre is underneath a huge drugstore (chemist). It is quirky, somewhat rock and roll, or rather grunge, and suitably makeshift as befits an improv space. It was as well arranged as the obligatory view-blocking posts would allow.
Posted by Peter More at 23:26
Email ThisBlogThis!Share to TwitterShare to FacebookShare to Pinterest
Labels: Food, Impro, Travel, US