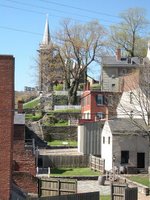 We were awoken early by a bird that for some reason had evolved to make a sound exactly like a digital alarm clock. It was definitely a bird because its tone was natural despite its resemblance to an electronic noise, plus it was ever so slightly irregular in a way machines never are without serious programming. Why would a bird evolve in this way? Surely Natural Selection would have meant that not only would have warned the worm of its approach and therefore got no food, but also later-starting animals, awoken early, would have set upon it making it extinct by now.
Perhaps it did not evolve, but was thrown out of the nest at an early age (probably because it made an irritating noise from the word go) and believed there after that its mother was in fact the Robinson's alarm clock. Every morning it would hear her call and would do its best to imitate that call. The Robinsons have since retired and now no longer need the alarm clock, but still every morning, the little bird calls out exactly at 6:30 hoping once again to hear the voice of its mother. This is all speculation.

Some time later, we feasted on another wonderful gourmet breakfast and met the other tenants of The Anglers Inn. 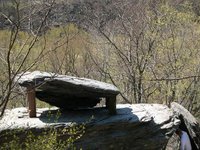 For our now daily dose of outdoor investigation, we wondered past the original Storer College and joined up with the Appalachian Trail where we left off yesterday. It took us pass Jefferson Rock, a large rock on which Thomas Jefferson once stood and apparently uttered some profound words about the town and view. Nowadays mere mortals cannot climb onto the rock and fences stop them nearing the edges of the bits below the rock. The rock is also perennially surrounded by school children who don't tend to say anything that could be described as profound. Their teacher asked for words to describe the rock, "big" was about the best.

We wandered some more around the town, popped into a few more houses that were now devoted to telling about the story of Mr Brown, the struggle from slavery to segregation and Lewis and Clark, "explorers."
Posted by Peter More at 12:51
Email ThisBlogThis!Share to TwitterShare to FacebookShare to Pinterest
Labels: Food, History, Travel, Wildlife