Last night, we suddenly awoke to a tremendous uproar happening downstairs. It sounded like plastic thunder. As if someone was throwing every single non-heavy item in the house to the floor. This fearful clattering happened in bursts of up a minute or more and moved around at great speed before stopping eerily for several moments.

I went down to investigate, fully clothed in the suit of armour God gave me on by birthday. But for some reason, the plastic nature of it lead me not to suspect young hoodlums. I threw the light on and the only visible signs of life downstairs were two terrified cats. One immediately started running and the thunder began again, setting off the other cat. 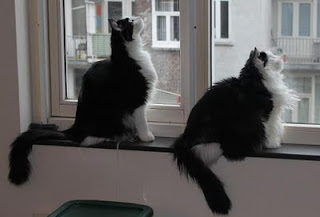 Flashback: recently the local council had started to collect plastic packaging for recycling. And being good little creatures of this Earth, we had enthusiastically taken to throwing old cartons and bottles into a bag in the kitchen. Both cats were strangely intrigued by the new bag and frequently stuck their heads in for a good old sniff. Borneo, who loves hiding in plastic bags anyway, was naturally the more curious.

So the scene that greeted us when we came down last night was that of a cat whose body was wedged in the handle of a plastic bag completely filled with empty plastic bottles. When he moved, it followed and made a tremendous racket, which scared him out of his little cat wits. This made him run faster which made more noise. Meanwhile his sister also tried to run away from the loud monster chasing her brother, but found it very almost impossible because Borneo was running just about everywhere he could to find safety.

If they weren't so terrified, and if we didn’t love them as if they were our own fat, lazy, spoiled children, we would probably have found it hilarious.
Posted by Peter More at 22:09 1 comment:
Email ThisBlogThis!Share to TwitterShare to FacebookShare to Pinterest
Labels: Cats, Wildlife
Newer Posts Older Posts Home
Subscribe to: Posts (Atom)