In Texas more than anywhere in the US, anyone who doesn't drive a huge pick-up truck the size of a school bus is a sissy boy. Or it might be that those driving the huge pick-up trucks are the over-compensating sissy boys, I don't recall which. In a quick, unrepresentative sample, 3 out of 4 cars on the road were pick-up trucks. This did not include our little one which didn't really count because it was only about the size of a regular car. Ours was dwarfed by some of the monsters on the road. In fact ours seemed more like a "life-truck" that you would have in the back of one of the larger trucks, underneath the spare tire for emergency situations. Most of these huge vehicles were in pristine condition indicating they have never been taken anywhere near "off-road" nor had they had anything of in the back any significant size or weight, nor anything the shape of livestock.

We drove into Dallas, to a café that seemed to have healthy food. There we met up with Cath's friends from her old Zen group. The group included one of the Zen masters, who was not what you expect from a Zen master. I'd been thinking of shaven-headed, silent type only able to speak in terms of metaphorical wisdoms. I was expecting to somehow feel I had lead a worthless life laden with clutter. In fact nothing could have been further from the truth and I didn't feel this any more than I normally do. Although the conversation with the Zen master was about very ordinary things I was certain that if I had been asking about some deep meaning within the universe, he could have answered that too. Or at least been told that the answer lies within myself.

Also there was the mother and aunt of one of the two college kids we housed for their short stay in Amsterdam a month or so ago. We had seen very little of them and when we did, we shied away from taking them to see the seedier side of Amsterdam life (apart from taking them to an easylaughs show, that is). However it emerged that the aunt had hoped we would take them to these places. Half-dressed women in windows and shops for the sale of soft narcotics are pretty educational. We can't be sure they didn't go and see these places for themselves, as we never saw them during the day, and it is very hard to find a guide book that doesn't mention these places. Even in ultra-Christian guide books it mentions them, stating "Stay away from these places of sin!!!!" And in the Amish Guide to Amsterdam it clearly states, "What do you mean you are getting on a plane? Have you forgotten everything we stand for?" 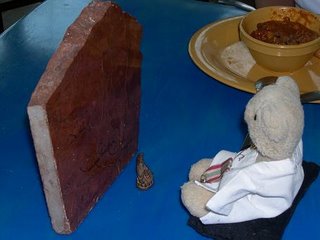 Another important member of the group was Duck Bear, a pocket-sized bear who accompanies one of the top legal minds in the country into court, and no doubt offers secret advice from his pocket vantage point. Duck Bear is so into Zen he has his own contemplation cushion and meditation wall. Duck Bear has entrusted me with the important of task of having the British queen's residence renamed from Buckingham Palace to Duckingham Palace. So far it has already started with The Telegraph already printing the name:

"Duckingham Palace declined to comment last night on the relationship between the Queen and the Prime Minister."

After lunch, we popped into a Borders bookshop to see the latest trends in cat discipline and check out the huge shelf of Bibles. We even got to check out the guy dancing enthusiastically at one of the listening posts. He seemed to have that part of the shop to himself. After he had kept up the dancing for the whole time we were in there, Cath went over and asked him what he was listening to. It was some cat called Paul Wall, who on investigation seems to be a jewellery maker to rap stars who has gotten into music to promote himself (this seems to be what myspace is really for). It seemed very likely the dancer was actually just a guerrilla marketer trying to start a vibe at street level.

We then popped into a drugstore (chemist) just to test a theory that they now have low-fat, reduced-sodium, Atkins-friendly condoms. They don't.

Throughout the day, the main news of the day was of a high-school massacre. People are very shaken up by it. Which actually surprised me as in Europe, if you had to list the things that happened in America, it would certainly appear in the top ten. It's nice to know people are not so desensitised to this sort of thing. And that they happen less than we think.

The evening was spent with more of Catherine's relatives, this time a spirited aunt and uncle on her mother's side. There was much discussion on the age beyond which it is impossible to travel, with no firm conclusions other than it's quite high.
Posted by Peter More at 14:22
Email ThisBlogThis!Share to TwitterShare to FacebookShare to Pinterest
Labels: Anthropology, Religion, Travel, US, Wildlife