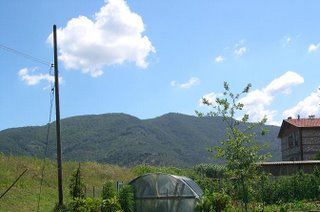 Our last day was pretty uneventful. We packed. We sat and read in the garden. We took pictures of the hills. We played 40-40 with one of the family nieces. We practiced our Italian in context for last time.

Cath's "ciao" and general pronunciation was praised a couple of occasions. Mine was not praised. "Ciao," as everybody knows is a general greeting meaning hello and goodbye. What less people know is it literally means "(I'm your) slave." This came as a mild surprise. I checked, and there seem to be no more surprises. For example "Buonasera" does not mean "beat me like the unworthy slime that I am," and "Arrivederci" does not mean "Arrange my vital organs in a dirty pile in the corner for you own me." 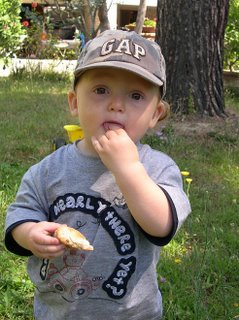 Then it was time to go to the airport. We said our farewells (or "flay me well" as it possibly meant) and thank yous ("thrust a plank up my behind for being unworthy of you") and allowed ourselves to be driven to the little airport that services the mostly upright city of Pisa.

We were early enough to have time to scan the duty free to find a pricier Limoncello which seemed to be free of additives. The flight was initially delayed for an hour, but the delay mysteriously disappeared and we headed off pretty much on time. It being midweek, the flight was reasonably empty, but both of us would have happily suffered a full flight for a few extra days in the glorious Tuscan environment.

It had been great to spend so much time with my brother. We hadn't spent this much time together since we were teenagers and the conversation back them was a lot more antagonistic.

One thing is certain from this trip. Having spent one week in the company of a small child, two cats are a piece of cake, no matter how needy one of them is. And if you lock a cat in a box, nobody is horrified at you the same way they are if it's a child. I think there's a lesson there for us all.