Where we are staying is one of those places where everybody knows each other. Actually, as we are staying in one of three villages that have grown and now over lap a little, I should say, where we are staying are three of those places where everybody knows each other, but that's just weird. On the street, in the bars and shops, people greet my brother and girlfriend warmly and make a great fuss of the little one. Along back streets are houses of cousins or aunts. It's a very cosy community. It's so welcoming that people have no problem to come into your garden if they want to speak to you and will turn up on your door and ring only if the door is not open. It's very different to the north of Europe, and in particular the Netherlands, where some families require several weeks notice of a visit, even if you are a son or daughter.

It helps if you have a toddler around. Babies and toddlers are great ice breakers. People who might have just said "hi," and wondered off, stop and inform the young-un how adorable he is, and how big and clever he is going to be. The kid, who on his most fluent days is only at the stage of shouting "car" repeatedly, accepts this with good grace, and will laugh whole-heartedly if he approves.

Even the house we're staying in is a big friendly place, where several parts of the family live on different floors. We were kindly put up in the room of an elderly relative who spends part of the summer upstairs with another relative. The room is full of pictures of Himself, as he is called in Father Ted. That is Jesus. A few are of him with his mum, the Virgin Mary. It's interesting that in many pictures we have seen of the two of them together, how big and grown up Jesus looks. It's presumably to give him some gravitas, but it does make it look like he is being carried around and breast-fed well into his teens.

We had never before experienced home Italian cooking. The stereotype is that there is lots of it, it's delicious, one portion is pasta and that as a guest you are encouraged to eat and eat. This all is fact. 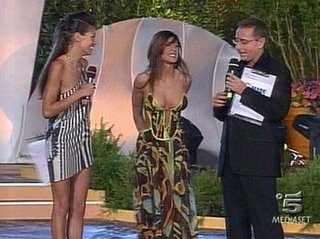 The only stereotype I have for Italian TV is game shows with very hot women wearing very little. Again, the little we saw seemed to confirm this. One show that was on every night had two such women whose job was to smile at all times and wear negligible amounts. In between the bits where they presented things like prizes and doors to be opened, there were variety-style musical acts such as one-man bands, women who danced in an old style or tenors. There was also a confusing man in a Muppet-style suit who gallivanted around Mr Blobby style. Because he is not human (externally) he is allowed to molest the women, where as they are off limits to everyone else except the odd flirty peck on the cheek from the host. This law whereby Muppets are allowed to molest the womenfolk only applies in Italy, as those of us who remember the case of the State of California vs Mr Snuffalopogus will know.

It was interesting to note that in the UK, we would call the girls on that show, with the big smile, large chest and vacant expression, bimbos. It’s a word we heard a lot in Italy as it means baby or small child. In English, it wasn't always a derogatory expression towards women, it originally meant a bloke. By coincidence it came up in this context at this time as Catherine's holiday reading was a couple of PG Wodehouse novels. It's quite alarming how many words start off harmless enough but end up as derogatory expressions for women.

After dinner, we were introduced to a local lemon liqueur called Limoncello. Its a sweet after-dinner drink and is a wonderful way to wind up dinner and the rest of the evening. Ours was made by someone in the village so was pretty darn authentic.
Posted by Peter More at 21:45
Email ThisBlogThis!Share to TwitterShare to FacebookShare to Pinterest
Labels: Anthropology, Drink, Europe, Food, Travel, TV