My brother gets by pretty well with his Italian, picked up over the years. Neither Catherine or I had any experience of it before, but were able to understand quite a bit considering. Catherine spent a few years on Spanish which helps; we both studied French which is useful; and Italian has a pretty simple grammar, a frequently familiar vocabulary and pronunciation that is pretty straight-forward and actually related to the spelling compared to say English or French.

It was quite refreshing to be somewhere where people generally only know a couple of words of English. It was remarkable how well we could understand and how well people could understand us. Mind you we only knew a few words which were all pretty basic. Catherine took to it especially well, and I made her official translator. It helped that most of the time, we had my brother and his girlfriend around.

Fashion is a big thing in Italy. That morning a stylish septuagenarian friend of the family wandered into the house. She told my brother's girlfriend that if she was her daughter she would cut off her dreads as they are no longer fashionable. She told her sister that she was to dark to be fashionable, being as she was a sumptuous chocolate colour. Cath and I weren't brought into the conversations, but I doubt we would have come out well. I miss the days of heroin-chic, when I, pale and emaciated, could was in vogue. 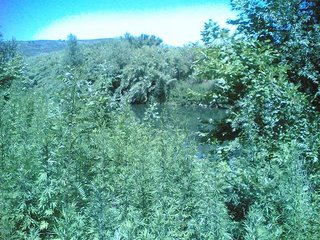 To avoid such human follies, Cath and I went for a walk along the river. It was getting towards midday and the sun was pretty darn relentless. Still nature continues unperturbed by the things that make us weary. We passed several all-black bees and some others that were black except for a sleek, yellow mark. Very stylish. Even the bees are chic here. Although I had expected the neighbour to reappear and tell the bees that all black was so last summer and they should get into the retro craze of orange and black stripes. 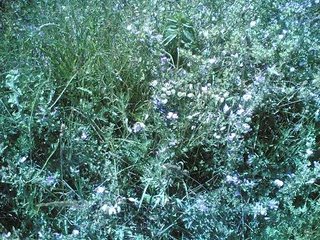 Several butterflies fluttered by gaily and crickets ground their legs musically. But for us the midday sun was getting too much, and we turned back to the shade of the house.

Later, once the sun had eased off, Keean was rested and fed, we drove to the seaside. It's not too far, but Keen hates being confined, so car journeys can be fraught because he has to be strapped in his chair by law (the law applies to all babies, not just Keean). Often they are a battle to keep his attention away from the fact his mother or father is in the front and not next to him and that he is strapped into a chair. It's hard work as babies have the attention spans that make teenagers look like research scientists. 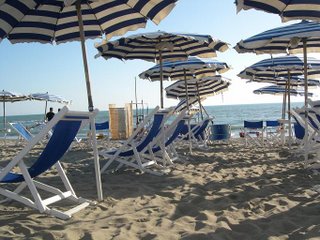 The family has a flat very close to sea side. With five minutes walk you can be on the gorgeous sandy beaches around Tirrenia. This part of the beach is privately owned and you must pay money to have a spot there. So for a couple of thousand Euros a year, you have your own changing closet and a fixed umbrella you can call your own. It seems a lot, but the beach is gorgeous and divided between a large family, it's not much to have a guaranteed spot on a beach that if public would be swamped at the height of summer. It does mean this beach can be a bit snobby, and sitting there amongst the holidaying middling-to-moderately-well-off Italians, I have never felt so pale in my life. 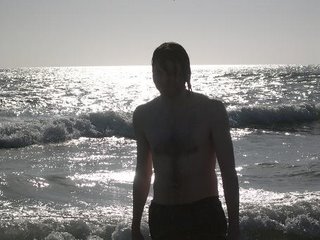 This picture is one of Catherine's favourites. She seems to think it looks like it's from a James Bond movie. It's the sunset that does it. Without that it would look like a scene from The Thing that Came out of the Swamp and ate Tijuana.

We even had a chance to look after Keen today. The parents went shopping and we watched him in the pool. As stated before, the little tike loves all things splashable, and for the first 20 minutes he was as happy as Larry (the merlamb). But with time came the realisation, we were not his parents. Once he realised this, there it was very difficult to stop him screaming. Looking at next door's pool would work for a few seconds, so would kicking a ball up the driveway, but soon he was back to screaming. I felt bad as it was during siesta time and lots of people take them during the day here.

It's not easy to deal with screaming children. Logic states that considering he wasn't really going to stop screaming until his parents arrived because nothing else was going to comfort him, you may as well shut him in a box to keep the sound down. But there seemed to be an unidentified flaw in this and an objection on emotional grounds, so we soon rejected the idea.

For dinner we have various vegetarian dishes, including spelt (an ancient form of wheat), whilst Keen spread his pasta over his face and table. He was perfectly content now he had his folks.
Posted by Peter More at 22:03
Email ThisBlogThis!Share to TwitterShare to FacebookShare to Pinterest
Labels: Anthropology, Children, Fashion, Language, Movies, Travel, Wildlife