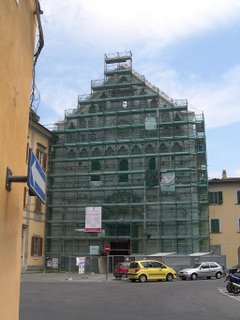 Just over from the park was our first post-brunch port of call. Il Chiesa di St. Caterina was supposed to have a nice interior plus being named after one of Lady Catherine's namesakes. However the building was having its façade worked on and we had to leave it be.

We walked a bit more, past some random ruins, not in the guide, of a former Roman baths. It was one of those things where if there hadn't been a plan and description with diagrams of what it used to look at, the uneducated in ruins such as ourselves would have just looked at it and said, "looks like a bit of a castle." 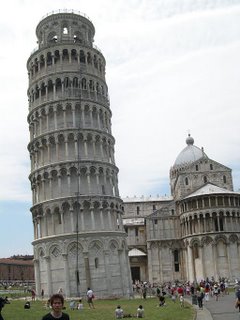 After a short bit we saw the crooked top of one of the world's most recognisable landmarks peering over the buildings. Within a couple of minutes we were staring at the full drunken glory of the Leaning Tower.

Pretty soon after the tower was completed in 1370, and it was already leaning, I'm certain a poor potter whose work was not good enough to be selected for one of the many churches, made a miniature potted copy of the tower. Nowadays there are factories and factories churning out scores of these every day. And its not just statues any more. Lamps in the shape of the tower are popular. That is popular with the stall holders. I never saw anyone actually buy one. Also common are T-shirts, leaning mugs and I wouldn't be surprised if I saw leaning platform shoes. Stalls selling such prized works of art form the gateway to the Piazza di Duomo and suggest the likelihood of there being a higher than normal concentration of tourists in the following neighbourhood. 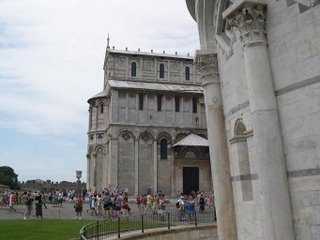 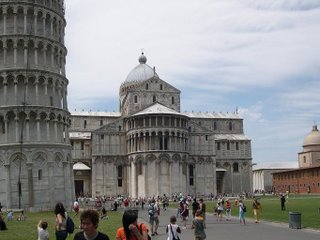 It's quite impressive to see it up close, but it is one of the world's most used images so it somehow doesn't feel new. I was expecting it to be more disorientating. Unfortunately, the wonder of "How does it stay up?" has long since gone. There are explanations everywhere of the procedures that have been put in place to keep it standing but leaning enough to still bring the tourists. In many ways the tourist industry has done very well out of what was basically bad planning and flawed surveying. But what we are often much more interested in the freakish than the beautiful. 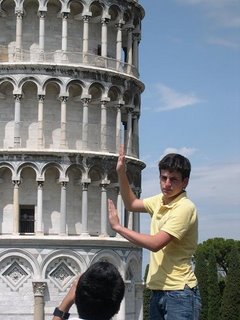 We didn't go in the tower, as it's quite expensive and we would have had to wait until the evening before a slot was free. Plus, I would have only gotten up a few flights in such a twisted building before vertigo kicked in. There is no way I could have appeared at the top and stood there looking down at the leaning world. We didn't even do the classic photo of us holding up the tower. We watched a few people doing it, all duplicating pictures taken since the dawn of photography. My idea was to take one with my having done a karate kick from the other side, but I'm sure this would be duplicating pictures taken since the dawn of kung fu movies. 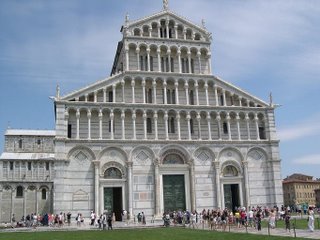 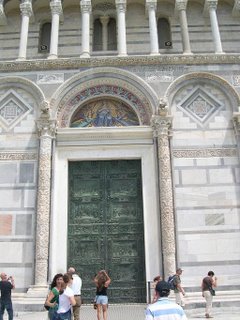 We did go in the cathedral near the tower. This is because it was a lot cheaper and Cathedrals are always cool. Cool as in cold. Plus there were no high bits you had to go into.

The cathedral is a big affair thrust full of art and artefacts. To go in, men had to remove their hats, and ladies had to cover their shoulders. This is pretty typical in Italian cathedrals, as I recall. For the purposes of the latter, there were blue coats provided which looked like the sort of thing you have to wear in hospitals. The blue really didn't fit in well with the sombre twilight of the interior. The shoulders of young children were perfectly allowed to be visible as far as we could see. I expect there's a passage in La Bibbia that states this rule exactly. "And upon entering the house of God, all heads shall be laid bare and the shoulders of women of marriageable age shouldst be covered by sheets of the holiest blue." 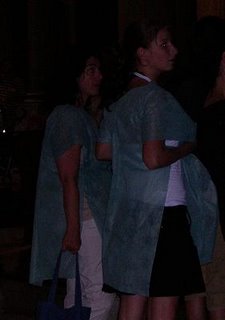 Even when the theme is religion, there were a great deal of subjects for the pictures that lined the walls of the cathedral. There were ascensions to heaven; martyrdoms, sermons being given. Something Catherine pointed out is something that is common for a great many such pictures. Often when such and such a person is saying or doing something important, the picture has lots of other people in them. However, these people, for the most part, are paying no attention to the main action of the picture and are doing their own thing. It seems odd that something that was an important moment, perhaps one of the plot points in the Bible, instead of everyone looking and heightening the importance of the event, practically everyone else is looking away, and in some cases even looking bored. I'd have burned them all as heretics. 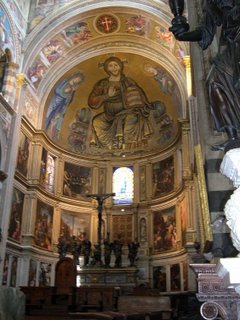 What we did not seem to have a photo of was a picture of a rather malevolent looking Jesus being carried by a particularly worried Mary. Maybe we took it and it didn't come out. Anything is possible with a painting like that.

Sculptures are also prevalent. One of the smaller pulpits was surprisingly modern and cubist, depicting Jesus and two other characters, one of them looking highly doubtful. Probably Simon. The main pulpit was a large cage sitting on a forest full of lions killing gazelle. The message here was clear. Listen to what the guy up there says, or be pounced on by the Lions of Satan. The Lions of Satan are Pisa's premier Heavy Metal band. Not to be confused with Leaning Tower, who are definitely Prog Rock. 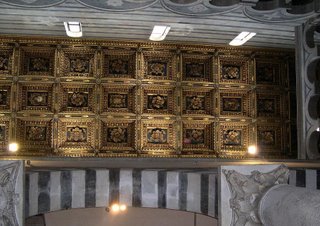 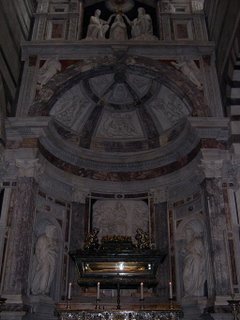 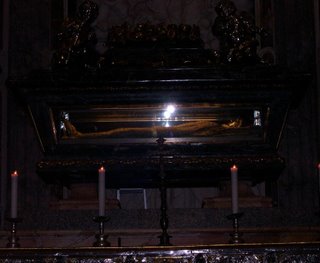