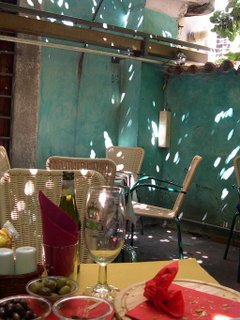 Lucca is a walled city not too far from Pisa. To get there we caught a train from a delightful station at San Giuliano Terme. The train was a slow, fullish commuter service, which even the fact it was in Italy didn't make it more exciting. What did make it more exciting was that it leaned really far over on corners.

The core of Lucca is surrounded but a great big wall, thick enough for there to be a very wide path on it and many trees to keep you shaded. In these times, when much of Europe is unbothered by the needs for defence of this sort, it has become the perfect place for joggers to tickle their hearts and dodge between the tourists. Bikes are common in Lucca, especially along the wall. Several gorms (that's the official term) of tourists passed us on our walk. At least one female American stated that this was "like the best bicycle path, ever." I have never seen the best bicycle path ever, but I now know I have seen one like it. 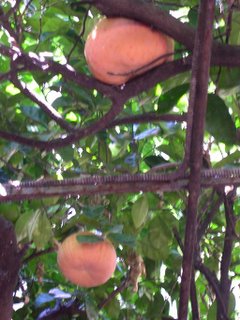 Actually, the wall was the last thing we did. First we wondered around the inner part of the city. We found the main shopping street, wondered up and off it, and eventually, settled for lunch in a café with a small, well foliated garden. The branches and leaves formed a natural roof that kept out most of the harmful sun. Strange fruit hung from them. Many unripe and green, others huge and orange, ready to drop on your head at any moment. None of them fell the whole time we were there. It was later discovered these were called caca or something like that. 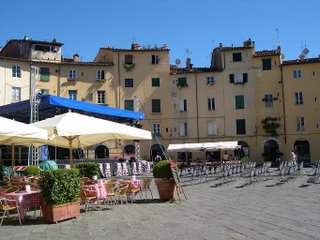 After lunch we went to find the part of town that was built on an amphitheatre. Basically, what this means is that the shape of that square and the streets around it conform to the shape of a Roman amphitheatre that used to be there. If you didn't know, you would not have noticed, except the streets there are called via amphiteatro and things like that. It's really not as exciting as seeing a real amphitheatre.

The town is not so big and doing a full circle of the wall is pretty easy. The trees make it very pleasant even in the heat of the day. It also allows you to look over a small part of the town. 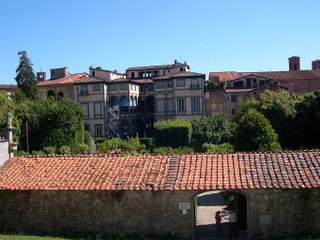 When we got back, we found that we should have taken in one of the churches which was quite splendid inside. I know from a trip to Venice some years back that when Italians want to do up a church, they don't just dash a bit of paint on a brush and have a different coloured skirting for variety, they really go to town. Given that back in the old days, the only place to exhibit your paintings to a wider public was in a church, it's no surprise that not only did all the great Italian artists spend much of their time painting pieces about The Madonna with Child, Saint This Rising to Heaven or Such-and-such of Someplace being Martyred by God-knows-who, but also that churches are chock-full of art. We didn't go in any churches despite here being about 100 within the walled area of Lucca. That seems to be about one church per 20 people. 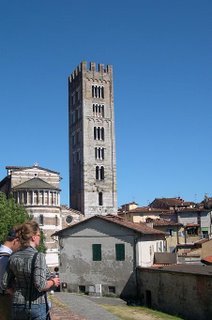 After the wall, it was well into the start of evening. We caught the train back to San Giuliano Terme and were driven up into the olive-covered hills above the town. Here lives one of the uncles. A long line of trestle tables was laid out and a barbeque was lit. There is another cliché of Italian life: of a large extended family eating a hearty meal in the open air under olive trees. Again, in the one week we were there, we got to witness this as well. It was as wonderful as you would expect. A real slice of the good life. Obviously, much of the conversation passed us by, as very, very few people speak English. But we felt very welcome and it was great to see my brother really welcomed as part of the family.
Posted by Peter More at 21:56
Email ThisBlogThis!Share to TwitterShare to FacebookShare to Pinterest
Labels: Anthropology, Art, Food, History, Language, Travel