We arrived at Pisa airport to a good heat and were picked up by my brother and his mother-in-common-law. On the way back, we stopped off to buy several slices of pizza and two smells of cecina, thanks to a mix up in vocabulary. Cecina (pronounced checheena) is a flat Tuscan flan made of chick-pea and olive oil. 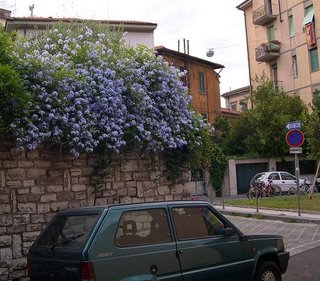 There are many stereotypes about Italy. One is that they drive small cars like crazy people on narrow streets. This is actually very true. The older people are, apparently, the more crazily they drive. The opposite to how it is elsewhere. We were told how recently a friend of the family was knocked down (but fortunately not too badly hurt) by an 83-year-old woman. The woman didn't even stop, or at least she wouldn't have if she hadn't hit another car. Fortunately the octogenooligan has since had her licence removed.

In the UK, it is the youngsters who drive likes bats out Surbiton and people get slower with respectability, perhaps with a brief fluctuation for some guys in their 40s. In Italy, young people too busy looking good to drive fast. It is the old folk, still vital due to good diet, who speed around like bats out of Livorno.

Another stereotype is that everyone is very stylish. Again, this is fact. Even in a small village, outside of a small town, people are stylish. Out for a walk on our first day we bump into a friend of my brother's girlfriend out walking her dog. She was better dressed than the average northern European girl on a night out. We later pass a jogger, perfectly colour-coordinated in black and white.

I should mention that the trip to Italy is not random. It was in part to visit my brother who's staying there a month with his Italian girlfriend and their one-year-old son. Being half Italian, the kid usually looks pretty stylish, and even wears his nappies (diapers) in a jaunty, modish fashion. 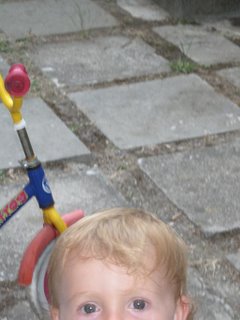 Over the last couple of years, we have managed to just miss my brother several times when visiting the UK, and in fact had only managed to see the young-un once, shortly after he was born and merely a machine for turning milk into chemical weapons. Catherine had indicated it would be nice to see the little tyke before he starts college.

Keean is one. He loves animals, especially dogs, toy cars, digging and water. He also enjoys tasting local vegetation such as leaves and moss. He enjoys water so much that the lady next door calls him il pescino (the little fish). If there is a pool he can sit in, scoop stuff out of and pour elsewhere or lean in and simply splash, there you'll find little Keean.
Posted by Peter More at 20:46
Email ThisBlogThis!Share to TwitterShare to FacebookShare to Pinterest
Labels: Anthropology, Europe, Fashion, Food, Language, Travel