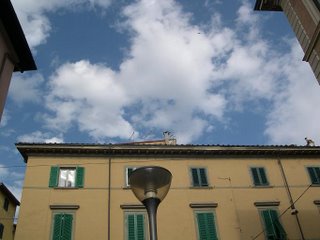 Back out in the heat, we walked through the throngs and throngs of tourists that gorm around such tourist webs as this. We wandered down the main street away from the square to find somewhere off the tourist path to eat. We thought we found somewhere, but when we read the small-print of the menu, we realised we were definitely on the tourist path. A one euro cover charge and a 20% service charge. This in a country where tipping seems not very common and in a place that had 2% worth of service if I was being generous. We had some passable attempts at Italian food and coffee. I guess we were paying for the shady bushes around their terrace, which admittedly were pleasant. 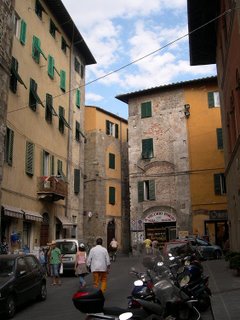 We had a bit more of a look through the guidebook and its stoner's history of the area. Catherine commented on how often fascism plays a part in Italian history, and sometime later I wondered if there was any relation between fascism and fashion. Fashion is actually a form of fascism, or at least dictatorial pressure from a self-appointed few. They sound like they should have the same verbal root, but it seems they don't.

We did some more wandering after this, taking in the town and avoiding the sun. We stopped and bought a pocket dictionary and a book of local recipes, including cecina (see earlier entry), in the local language to help us with our new fascination with Italian that we hoped to continue. Even then we knew, fascinations with languages of travel destinations are like holiday romances. They seldom continue for long after the trip is over. However, I still say this one is different. 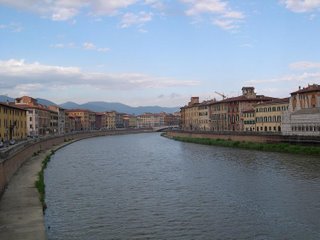 On our way back out to the station, we went past La Chiesa di Santa Maria della Spina (the church of Mary of the Spine). I guess the translation is more like thorn than spine. The story is the church was built to house a thorn brought back from the holy land. This thorn was supposedly one of those from the crown that Jesus wore on his last day. (Well, the last day not including the bit where he came back.) It was obvious that this happened in the Holy Land and not Italy, otherwise the Bible would recall some Mary or other coming up to Jesus and saying "Do you really think that's fashionable?" Perhaps even adding, "That so 5 BC."

The Thorn(y) issue caused an animated discussion (by our standards) about belief in those days and whether people really thought this was one of the real thorns or whether it was hedging their bets, building a church because you didn't want to be disrespectful if it really was one of Jesus' thorns. I personally believed that everyone up the line believed it was true, but do wonder if the stall keeper in the Jerusalem market might have had a wry smile on his face during the transaction.

Relics from the crucifixion was one of the big industries in Palestine in the early part of the first millennium. It's been estimated that if all the bits of wood sold as official parts from The Cross were put back together, you could build a crucifix that could deal with Godzilla or any of his disciples. 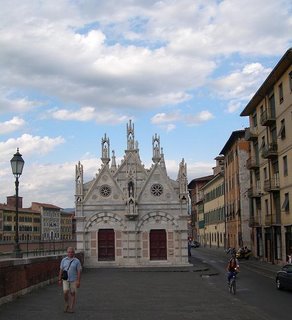 Anyway the church was shut so we have nothing more to go on. The guide book gave no indication if the thorn was still in the church. Thorns don't tent to last 2000 years. (Editor's note: The interweb is in some doubt as to whether the spine is still in the church, has been moved or was lost down the back of the altar after a particularly heavy sermon.)

We bought our tickets back and waited for the bus. The public transport is remarkably easy here, except that you have to buy your tickets for the bus before hand, usually from tobacco shops. But once you know that... 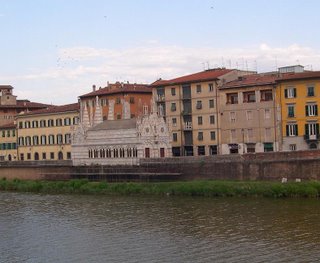