My family goes nuts at Christmas. There is a feeling that it the person doesn't get their own height in presents the day has been a failure. Cath's family is far more restrained.

Not only that, but Christmas in my parents house is spent with a light alcohol buzz culminating with a unified falling asleep during the evening's compulsory Bond movie. The day starts there of late with a glass of champagne around breakfast time, I guess to wet the baby Jesus' head. And that's just the start. Even the Christmas pudding has an impressive percentage proof. 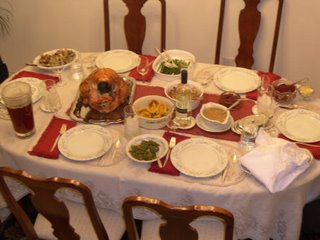 The traditional turkey and entourage is not too much different on both sides of the pond. The Americans love their cranberry sauce and the vegetables may well include a squash. I only recently discovered that there was such a thing as a squash. For those of you who live in the ignorance I used to live in, it is somewhat related to the pumpkin, but they tend to have the shape of other vegetables such as turnips. It seems an odd name, until you realise it's a contraction of the original Rhode Island-area word, asquutasquash. The word means "uncooked" or "that which is eaten raw" which is interesting compared to pumpkin which originally meant "ripe." Tamale on the other hand means "heart attack." (Only kidding.)

Among the American Christmas dinner institutions which will never make it to the UK is the "salad." "Salad" in this context is not like anything you would ever picture when someone says the word "salad" to you. It's some nuts and candied fruit in a sweet, green blancmange-like jelly. It tastes like the deserts we used to have at school. Tasty in an artificial and nostalgic sort of way, but too sweet for me to have with my main course. 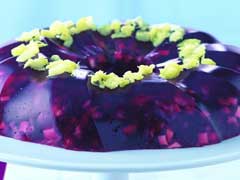 One other turkey-related tradition that exists on both sides of the pond is the pulling of the wishbone. My experience is that whoever finds it gets to pull it with someone and the one who gets the larger part will be blessed with luck until the next year's year's turkey is served. It's similar in the US, although you don't have to pull it immediately, and you are allowed to let it dry and get hard. Tricks such as soaking it in things to make it rubbery and unbreakable are also allowed.

After a great meal, the universal yuletide tradition is of vegeing in front of a roaring, open television. This year one channel was constantly showing an American Christmas classic, "A Christmas Story." It's a great look at Christmas and family from the point of view of scheming, somewhat nerdy kid who's only goal in life is to own an air rifle. I even managed this year to see a fair bit of "It's A Wonderful Life," a film I'd managed to miss despite the many Christmases I'd spend on this planet. It's a film which is ALL set up. The meat of the film is only 20 minutes after an hour of setting up. Syd Field must hate it.

Most TV ads seem to be for cars the size of small houses and medicines. The medicines may possibly help you, but the list of disclaimers and recorded possible side-effects mean that you would have to be suffering pretty bad to even think about mentioning it to your doctor as they always tell you to do. There is no disclaimer for potential emotional distress when your doctor laughs at you when you mention the drug.

One last common TV Christmas tradition is the heart-warming season-related news story. This years was about a man who was released a little early from prison (after 17 years) for having smoked dope whilst on parole for stealing 2 dollars. "You in Texas now, boy."
Posted by Peter More at 14:05
Email ThisBlogThis!Share to TwitterShare to FacebookShare to Pinterest
Labels: Anthropology, Christmas, Food, Religion, Travel, TV, US