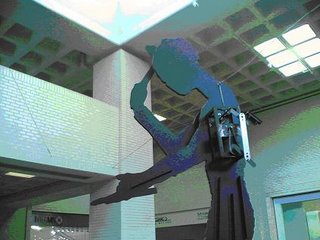 Yet more shopping. But we ended the day by heading over to Fort Worth to watch some improv comedy. Four Day Weekend are a bunch of guys who from what I can see seem to be the best group in the area. They certainly put on a great, tight show. The opening was low-key, but effective. Made to be a sort of therapy session, where a light picked out people from the audience who were declared to be alcoholics, drug addicts, prostitutes, etc.

They do many of the usual games, but also they throw in free scenes. They even have a few twists all of their own, like a game which is a take-off of one of those ride-in-the-car reality cop shows. In this, two actors play two very Texan cops cruising around and talking to the camera guy in the back seat. What makes this game is that there really is a camera guy with a camcorder behind them and the footage is relayed on a big screen. The effect is especially good when they give chase to the (celebrity) perpetrator. They all run on the spot, but with the shaky camera 'following' them, it looks exactly like the chase sequences from these shows. It all ended with a Day in the Life style musical, and they were lucky to pick a teacher whose hobby was roping cattle. He was dressed as one would expect with jeans, huge belt buckle and bandanna. Possibly the most Texan person I have encountered so far.
Posted by Peter More at 15:44
Email ThisBlogThis!Share to TwitterShare to FacebookShare to Pinterest
Labels: Anthropology, Impro, Travel, US