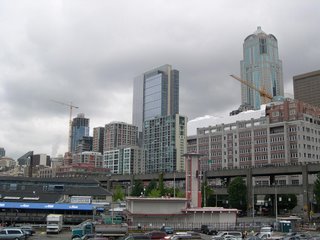 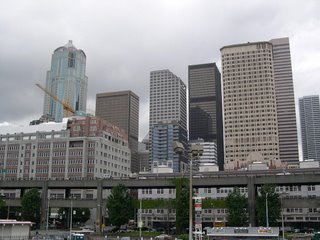 The second and final day of Cath's conference. In posh hotels such as this, checking out is easy and can even be done over the phone. So Cath went off to the conference and left me with the luggage. Footballers' entourages include WAGS – wives and girlfriends; Internet Marketers' have BAHS – boyfriends and husbands. Although I found no others like me to form a club, so I had to go shoe-shopping on my own.

At home having to walk (or in fact cycle) over to the bank seems a chore and is met with apathy or even recalcitrance. But when you are on holiday, you will happily walk the few blocks to the bank. It's mainly to do with the fact the route is new to you. 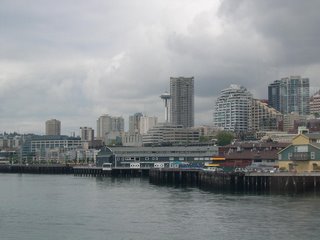 Having done my research, I knew almost exactly where the Barnes and Noble was and how to get there from the bank. Even this wasn't enough to locate it first go. Normally these bookstores are visible from miles away - sometimes even from space - this one was more subtle and I really only stumbled upon it. The book store was mostly in the very large basement, see tomorrow for a history of that.

It took a while but eventually I arrived back at Pike Market and found a place to have breakfast. It was a French-style bakery. I ordered a pain au chocolat. Now the nice thing about pains aux chocolats is that they have this thin line of chocolate running through them which gives them a sweet kick. Obviously in America this isn't enough. This one had three thick strips of chocolate which totally took over the flavour of the thing. I didn't enjoy it. One of the school-kids on a trip to learn French (it being cheaper to take the kids to a bakery than to France) declared it as the greatest thing he's ever had. One day he'll go to France an have a real pain au chocolat and be disappointed. But by that time he'll be as fat as a house and the painier will just sneer at him. 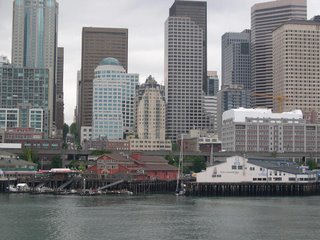 I also ordered a coffee, but it took a while to get to me owing to the dishwasher suddenly flooding the place. I was on the outskirts of the water and quick enough to save my laptop bag from getting damp and threatening my new writing laptop, but the confusion consumed the whole of the staff for many minutes. I read and watched the good-natured mayhem.

Eventually the teacher of the kids came over and spoke to them in French. She had such a strong American accent that I could barely understand her. These poor kids are so going to get sneered at when they go to French. But I expect they are prepared for Canada. 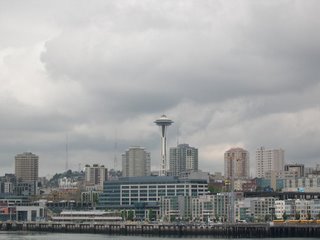 I wandered along the piers and found myself outside of Ye Olde Curiosity Shop. It's THE place to buy shrunken heads, mummified bodies, stuffed Siamese-twin calves and random Native American memorabilia. They had totem poles for every occasion as well as jokes, t-shirts and dead creepy crawly paper weights. One favourite was a sign of a pirate saying "all ye who enter here, surrender the booty." Even the patrons had great gift ideas. The most Seattle gift I saw was a coffee holder that fits onto your pram or push chair. Just because you are walking your kids doesn't mean you don't want coffee. Sure coffee suspended above the feet of young children presents some health risks, but they should have thought of that when they asked to be born.
Posted by Peter More at 19:52
Email ThisBlogThis!Share to TwitterShare to FacebookShare to Pinterest
Labels: Anthropology, Books, Drink, Food, Language, Sex, Shopping, Transport, Travel, US