It was one of those days that starts like this: We got up, had breakfast, went shopping and then it was 4 pm. Catherine at least got some new shoes and sun glasses out of it. I got a cosmetics case. A big sturdy, manly cosmetics case in which I will keep razor blades - but still a cosmetics case. After lunch, it was time to drive through the erratic Dallas Saturday afternoon traffic to begin the rest of the day, which was very different to the start. 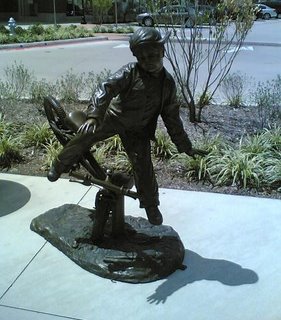 It started with our plane to Los Angeles being delayed on arrival at our end. Once it had gotten there and they had loaded us on, they reported a technical problem with the cargo hold. This didn't take as long to fix as we had thought, but we were then already quite delayed.

LA is a sprawling mess but somehow looks like Christmas from the air at night. It is to my knowledge the most chaotic city in the world. At least outside of Asia. It's like people refuse to organise anything there, but leave it up to people to sort it out for themselves. The roads are madness as everyone fights for themselves with practically no public transport to speak of. As a result merely retrieving your bags at the airport is mayhem. Even this simple thing is chaotic in LA.

However, it being LA, their airport offers some great people watching. Cath observed a typical producer type shouting down the phone because there wasn't someone there to meet him with a card with his name on it. "I pay a lot of money for this service..." he L.A.d. I noticed a tall, model-proportioned woman in a designer yellow tracksuit looking suitably aloof and far too well made up for someone who just got off a plane.

The car hire shuttle buses jockey for position – there are so may of them. Other airports have one shuttle that takes you to each of the lots. LAX (it certainly does) lets all the companies fight it out amongst themselves. Even we knew in LA you need a car. Despite the mayhem on the streets, there simply is no other way to get from A to B in a city where A and B are the other end of the alphabet to each other. The Hertz shuttle bus took us to every terminal and then slogged its way to the Hertz lot. Here we fought through a ridiculous array of counters to find one taking people, albeit in a short-tempered way. What didn't help was that a flight from China had just arrived and people were having to decipher Chinese Driving licences. Especially difficult without any recognisable letters and the fact Chinese dates are written year-month-date (largest first, just like their addresses). Our server warmed to us when she discovered Cath had moved away from the US. There was an almost dreamy look in that weary eye.

The drive was suitable chaotic. Trying to find our way amongst the Saturday-night traffic, along the badly kept roads, using the poor signs and inadequate maps. We made numerous U-turns and once, drove over an area not for such an action just to avoid coming off of the freeway into a bad area. Gangland, if movies are to be believed.

Somehow after a few false turns (including U-turns, M-turns and 8-turns), we made it and arrived at our hotel in the heart of LA's rich district, Beverly Hills. It should all be plain sailing now... No of course not. We drove down into the heart of the building and then realised there was no way up for people not yet checked in except the steep, narrow car lane. So we drove up and let the valet deal with it. We were now in the hotel. What could go wrong? Well, this: The hotel had one room left that they were reserving for us. It was "blocked." "What?" said we. "Blocked." It wasn't clear completely what happened. The actor behind the counter (I'm not kidding, he really was an actor who having been in a Tony-award winning play in New York had relocated to LA to get into movies) explained that someone had called and "blocked" the room. The supervisor, who didn't appear to be an actor but a hotel man, although had a good face for The Sopranos, came and after a call to the manager (mysterious and unreachable – it could have been Marlon Brando) and then IT (probably all Bollywood stars) said that someone had the room open on their screen and so this had blocked it. To solve it, the man who was waiting for his follow up to his roll as younger brother in Surfing Mumbai reset the system (for the hotel itself or the Marriott chain as a whole was not clear).

It was all very interesting, but not at one a.m. when all you wanted was a bed. Sleep, perchance to dream... Oh, no, now all these actors have got me at it.
Posted by Peter More at 14:02
Email ThisBlogThis!Share to TwitterShare to FacebookShare to Pinterest
Labels: Anthropology, Movies, Transport, Travel, US