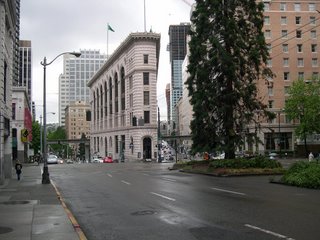 Today was the first day of Catherine's conference. I dutifully stayed back in the hotel and tidied the room. Chores done, I went for a wander. I had a greasy but pleasant breakfast sandwich at a pseudo-Italian snack bar. It wasn't really Italian as it didn't even have its own coffee. I had to go next door to a branch of Seattle's Best Coffee. And thank Java I did. I ordered a medium latte. I was expecting something the size of a thimble like you would get in Italy but instead got something that was the size of a car you would get in Italy. It was delicious, so I drank it all. A few minutes later I was buzzing in that healthy way too much caffeine gives you. 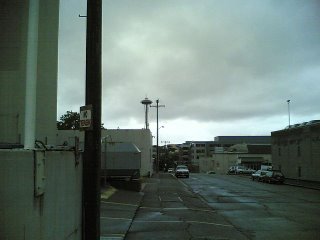 I had decided today was for shopping. I was partly walking/hiking shoes so first tried the near-by Army Surplus store. It was a great place for ex-army boots, Israeli gasmasks and camouflage bikinis. (I almost but didn't ask if they had any of the latter in Catherine's size. They seemed to be for display purposes only) Then I moved on to REI, outdoor recreation specialists. Their flagship store was on the other side of town. It seemed like a good walk. I figured if you can't walk (or wheel) to the hiking boot store, you shouldn't be allowed in. 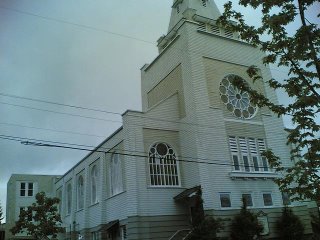 I was unusually in a shopping mood. The mood doesn't take me often. I expect it was the influence of being in the US, where shopping is the number 3 national pastime after watching TV and eating. (Shooting sprees are down to 5 this year.) I bought walking shoes, a laptop case and even considered a moose backpack (as a gift you understand). I also nearly bought some wildlife puppets because they were so expressive and would be great for a puppet show. What stopped me was the question, "when the hell am I going to have time to put on a puppet show?"

I walked back the slightly longer way nearer the space needle. The space needle is easily the most distinct building in Seattle. It looks exactly like a space needle. Or a UFO on a launch post. Or that strange pattern on the side of the Frazier logo.

Seattle has an abundance of street people. They are certainly more visible than in other cities. But they are not threatening. In fact they seem entirely genial.

When nearly home, I was rewarded with an overly friendly decaf mocha from Tully's, another Seattle coffee chain. I swabbed it down with a sugar-rush apple thing. Not only were the staff super friendly, but even the young high dude who appeared at the door, waved and mouthed "hi, how ya doing?" to me. Once in, he asked a random question of the staff and called "leave her alone, dude" to someone on the phone as he left. Another hippy-cum-street person who left later said "hi" also to me as if he knew me. Maybe I have a double in Seattle living on the street. This would explain why I was acknowledged elaborately by at least one other person. It could also be explained by the fact that Seattle is the route into the US for heroin. 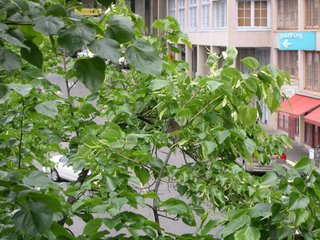 My next quest was to find a replacement power adaptor for Cath's laptop. Hers being sat on her desk back in Amsterdam. Here I will cut a long story short and simply say "nada." People in Seattle are very helpful. There are even people who are hired to stand on street corners and help you out with directions. So when someone tried to tell me where Barnes and Noble was, I gladly added my name to his list of helpees (which helps them be paid) and my country. As I told him was from London, he made me put this down as my country. It didn't matter that as he gave me two possible routes (or rowts) I got confused and failed to locate the shop.

That night we took another taxi to International Town (formerly Niptown, Chinkville and Oriental Express Freeway, according to the poster shop) and dined at the Shanghai Garden, I believe it was. It was very pleasant and the pepper squid had an unexpected kick to it.
Posted by Peter More at 22:33
Email ThisBlogThis!Share to TwitterShare to FacebookShare to Pinterest
Labels: Anthropology, Drink, Food, Shopping, TV, US, Wildlife

I love your writing. So evocative, for those of us who haven't been anywhere for 4 years now.