Sleeping was not as easy as you'd think. The hotel had one of those air conditioning systems that works by loud mechanical gears, clunking pistons and turbines from the days before oil. We found out in the morning it is possible to switch it off, but then of course everything heats up because LA is all about sunshine and chaos. It's hot and sticky.

Those of you who complain about the size of UK Sunday Newspapers should get a US Sunday Paper. There's enough written material here to keep you going a whole month. And enough wood to build a shed.

The hotel had a buffet breakfast like most hotels. It was pretty good with a fair selection. Best of all was a make-your-own-waffle machine. However, this was so popular you could never get to it for kids.

The morning concierge also had that actor look. It's pretty safe to assume everyone in LA from the road sweeper to the mayor is an actor. It should be noted that even the state governor is an actor. (In the loosest possible meaning of the term - he's actually only a bodybuilder who can read out lines, but in Hollywood, anything goes.) 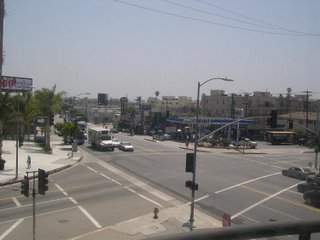 We took a walk around the area. It was not the movie-star part of Beverley Hills, but a highly Jewish area. With kosher delis, Hebrew schools and groups of men walking around dressed in black with big hats covering little caps. We stopped in Label's (probably pronounced "Labelle" rather than "label") for so-so coffee and coffee cake. I liked the coffee cake, but it was perhaps a bit early in the morning for sponge. Cath said it wasn't at all what she thinks off when she thinks of coffee cake. The guy seemed to mutter when we only ordered coffee, I think annoyed that we didn't order any of their staple sandwiches. 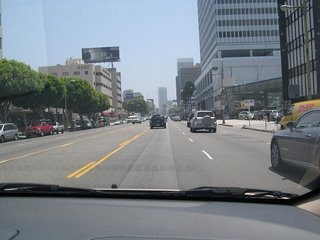 A number of years back, a friend, Carolyn and I staged a few cultural exchanges. She came to London and I went over to see their three capital cities Washington DC, Disneyland and Universal Studios. Since then she's been married, separated and now moves in theatrical circles.

Carolyn and her friend Arjay had agreed to show us about a bit. As they were running late we decided we had time to feed Catherine. We went to "Factor's Famous Deli" which was closer, bigger and better labelled than Label's. We sat in the nice garden whilst Cath had a great ALT (Avocado Lettuce Tomato) on rye bread (of course) and I had a very decent cup of coffee (decaf as there had been much "caf" at breakfast). This meant we were a little late getting back and nearly missed the friends. But eventually we got together and drove to some of the places to see and be seen in LA. 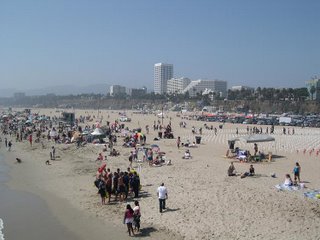 First off was the Santa Monica Pier a popular tourist and pleasure zone. Off the pier is the beach front. The beach is beautiful golden sand made 1,000,000 degrees by the sun. Near the pier is Muscle Beach, made famous because here men and women with bizarrely formed pectoral muscles would perform amazing feats of sand-kicking.

Although we had been hoping for stars, the beach is more for your regular people, so we saw only one instance of over-the-top breast enhancement. We saw none of what we were really hoping to see (and something a lot of guys are apparently getting) butt implants. 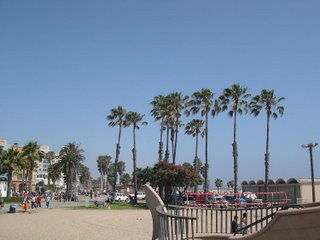 Dogs were very much in evidence. LA is dogtown. People have all shapes and sizes of them. There is a tendency for the smaller more effeminate dog especially wearing a designer dog T-shirt, but you can also see many of the super-large variety often filling the back of a large pick-up truck.

We moved on to the Venice area named after the canals there. We didn't see any of those, but wandered down a street famed for its quirky shops and good eateries before popping in for some good old up-market slash quirky versions of regular foods. I had a pretzel burger which proved that sesame buns or wholemeal rolls are still the top thing to put burgers in and not pretzels. But you can't blame them for trying. 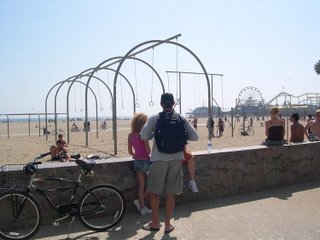 Along the beach a variety of stores and home-made stalls appealed to the hippy in all of us. And also the fashion victim in all of us, as the ultra-tight leggings painted made to look like jeans proclaimed. People sold their wears or set themselves up as human guitar-wielding jukeboxes. One man declared that he would insult anyone anytime for a fee. We nearly took him up on it.

Once again the so-called beautiful people were less in evidence. But then it was Sunday and they were probably in Church. Or at kabala school. Oh hang on, that's Saturday. 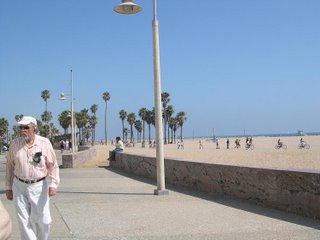 It had been nice to see Carolyn again, even for a short amount of time. We shall have to make sure it can happen again soon.

At night, back at our hotel, the streets were patrolled by gangs of men in black coming and going, possibly to their gang head quarters, or "sinnergogs." We had planned to go out and watch some sketch show performed by improvisers or some other Sunday twist on improv or just find a haunt to hang out with the stars, but tiredness due to obscene heat (in my opinion, not Catherine's) took over and we collapsed on the bed. 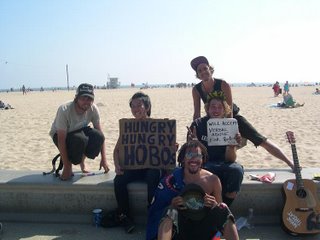