Our hotel was one of the many quirky hotels which San Francisco is famous for. It sits amongst many other hotels (both quirky and chain) in an area not far from Union square a focus of much tourism and shopping. Breakfast is provided in the hall of each floor and so you can go out and pick up what you want without too much preparation. I hardly met anybody going to get my coffee and pastries so could have worn almost nothing had I wanted. I did. That is I did wear something. It was small scale and there were no waffle making machines and no Spanish ladies making omelettes. Which is odd because the room was costing us more than the hotel in Beverly Hills. Beverly Hills! Not round the corner from two massage parlours and within the shouting range of drunks. But the novelty of it being almost outside your door was something. 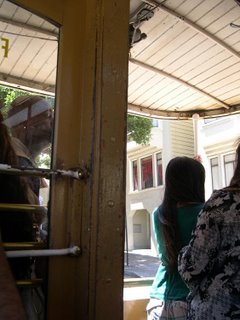 The day was Sunny but windy. One of those days where I wondered if it might get too hot and Catherine was freezing. We wondered down to the end of Powell Street where the Powell-Hyde cable car is manually turned round and sent up again. San Francisco is blessed with an abundance of public transport. Where as in LA it is invisible and unused, in San Francisco you are never far away from a bus, cable car, vintage tram or other form of mass transport. And if you like the underground form of transport, you can always do the Bart, man. A vintage trolley/tram travels up and down the divisive Market Street and then up the coast. Hundreds of buses and electro-buses cross the city in a variety of ways. And there are two cable car lines. These go north-south and seem to only ever be filled with tourists. They cost 5 dollars a pop, where as all the other forms are $1.50. $1.50 to go anywhere in a big city. It makes most other cities, London especially, look ridiculous. At the terminus for the Powell-Hyde line there was a large line of tourists waiting to buy tickets and passes. And an even longer one to get on the cable car. We queued and got 3-day passes (aka Muni Passport) which give unlimited travel for $18 and then walked up the street. At the terminus they only let enough people on to fill the seats. This is because they know from then on people will jump on at the next few stops. We did so, and followed the line to its end. 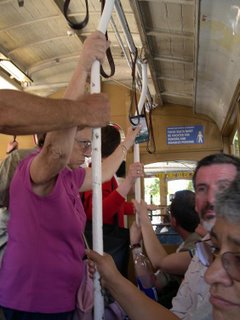 Whilst we had been in the queue for tickets, we nabbed a huge folder that was being touted about for free Starbucks coffee. The huge folder contained a tiny little business card thing that was the actual offer (you can have a free iced coffee or iced mochaholic (or something like that) on Wednesdays). The rest of the packaging was useless. The guy giving them out even said, don't throw them on the floor. Guy, tell Starbucks to just give you the card rather than a folder that is instant rubbish.

How the cable cars work is quite fascinating. All along the route under the street is a cable. It moves constantly - you can hear it. The cable car, when it wants to go forward, grabs onto the cable and releases the brakes, when it wants to stop, it releases the cable and on go the brakes. The cable car goes up and down the hills and when going down the two conductors have to literally jump on the breaks. It goes down streets with elderly Japanese tourists holding on the side for dear life; streets that sometimes are just wide enough for two parked cars, and two cable cars and 4 elderly Japanese tourists. 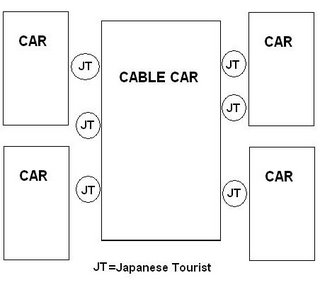 We took the cable car to the end: the marina. Here we wandered around. In the bay was a nice old sailing clipper. After the bay there was the maritime museum. It was not that old a building but it was dilapidated. If it were a ship it would have sunk with all hands. It WAS ship-shaped although certainly not ship-shape.

Our wandering morphed into a search for food. We found a fascinating looking nouveau-Vietnamese. Nouveau but not ouvert. It turned out to be part of the Ghirardelli Square. History bit: Ghirardelli was an Italian who came to California via Venezuela hoping to strike gold, but instead formed a very successful chocolate company. What seemed to be the old factory is now being turned into an up-market plaza with a tourist and chocolate bent. Although it is not finished, many businesses are already open including a McCormick and Kuleto's (this guy teams up with anybody). We went for Lori's Diner as it had outside seating and courting pigeons. Cath had something semi-healthy and I went for a Hot Rod Burger, because you can't get any more American than a Hot Rod Burger. It's a burger smothered in chilli. The burger itself was fine but the chilli was somewhat effeminate and the onion rings were sugary. 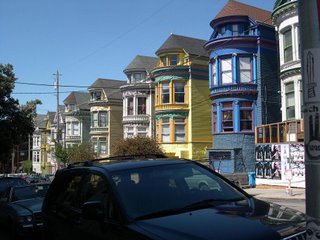 After this we partook of coffee and one of Kara's Cupcakes < http://karascupcakes.com/ > before checking out the chocolate store. It was full of chocolate. A girl at the door gave out small free samples of something filled peanut butter that would kill me if I ate 5. I had 2.

After that we walked to catch another bus, this time to Haight-Ashbury. Haight-Ashbury (pronounced Hate-Ashbree) is an area of town named after two streets that was once an area frequented by hippies. I'd only just heard of it, but to Cath it evoked all of the romance of hippidom. That is free spirited living outside of the system as opposed to being stoned and unwashed. This all happened 40 years ago. Now Haight Ashbury is a tourist street with some hippy-themed stores. There is very little evidence of real hippies living there. The odd street hawker and particularly hairy old man was all we saw. Off the main street are some great houses. Some have been painted in striking but pleasing ways. The odd one has hints of psychodaelia. We wandered round trying to find vestiges of hippiedom and then walked further down Haight to a more grungy/rock part of town. An empty bar played Ministry in the mid afternoon. I know I'm getting old as now I believe there is a time of the day that is too early for Ministry. 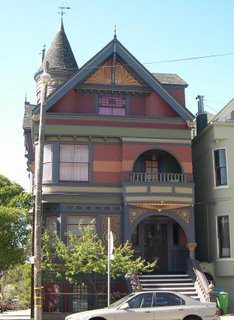 We struck off and found a nice local café – Café du Soleil (formerly called Boulange de Cole Valley). There we had beer and wine and observed local life. It was a definite neighbourhood, with allegiances and conflicts. One person tried to move her chair into the sun slightly further away from the café. She was very jovially told that some do-goody curtain-twitcher complains every time a chair moves too far into the sidewalk. There was even what I thought was a drug den: a house outside of which a gang of motorcyclists made lots of noise and at one point a couple of young kids sloped into for a ridiculously short amount of time, trying to look cool and not scared or suspicious.

In American Apparel, amongst the usual array of slinky clothes for skinny teens, were tiny t-shirts for tiny dogs. This is where people buy them. (We'd seen a couple on the beach already.) There was quite a selection but I didn't see any of their skinny jeans or sheer, see-through underwear for dogs.

We took a bus back that took us along Market Street to somewhere near where we got on the cable car that morning. The length of the queue for the cable car was actually only about the volume of one cable car for once. Soon after, it was back up to former length. Cath waited outside the public autotoilet but because of some clearly dodgy deals going on. She never got in. When the time was up for the person in there, someone waiting outside, handed him something and the door closed again. I'm still clueless as to what could have been going on. I can only suppose drugs or criminal stomach trouble.

We went to Chinatown to look for a snack for supper. It was a bit late, about 10, but we were surprised to find nothing whatsoever opened. Chinatown is somewhere I expect to have some late night places. But given that about 3/4 of San Francisco seems to be Chinatown, I can't say we explored much of it. To make sure we didn't die of the munchies, we popped in to witness the sort of crazies that frequent late-night pharmacies.
Posted by Peter More at 19:58
Email ThisBlogThis!Share to TwitterShare to FacebookShare to Pinterest
Labels: Anthropology, Drink, Food, History, Transport, Travel, US