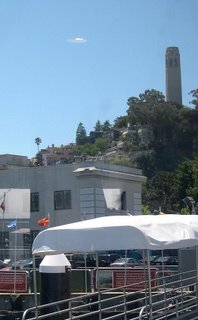 Notice the UFO in the above picture. Is any more proof needed? 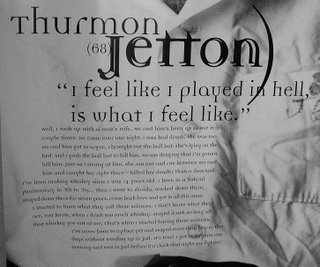 We grabbed our breakfast from the hall and then headed out. There was a whole saga in searching for a stamp. We gave up for then, but eventually had word that there was a post office beneath Macy's. We wandered down to Market Street via a somewhat dodgy area. There were many beggars and at one point a guy had fallen out of his wheelchair. Two motorcycle cops were already on the scene and taking charge firmly but friendlily. We caught the historic Tram Line F where old trams (not just from San Francisco but also from other cities are run for the use of locals and the joy of tourists. We caught it in a bad part of Market Street but it meant the tram was not too busy before the stop where all the tourists get on it. The line goes to the end of Market Street and then heads up along the harbour. We went to Pier 33 as the night before we'd booked tickets to go to Alcatraz. 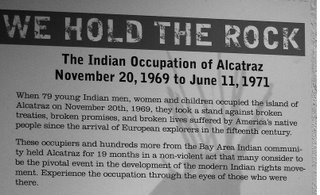 Once the last place you might want to be sent, now huge queues of people wait to get on the boat to go there. The island is prime real estate; plumb in the middle of the bay with great views of both bridges and of the city itself. The trip over is quick, and the boats are large but full. You need a couple of hours to really do the island properly, even though there is much of the island you can't get to, either due to renovation / dilapidation or because birds are nesting. The island is prime nest site for gulls, guillemots and other sea-faring birds. 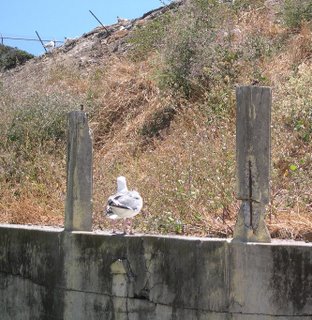 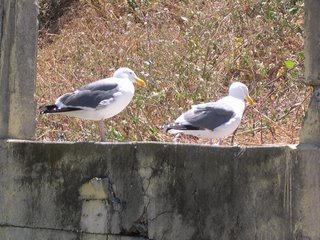 Most people start with the short film giving an overview of the history. It was originally made by or for the Discovery Channel and I had seen it before as it was somewhat familiar. So I even knew vaguely about the Indian Occupation which Catherine didn't. This, for those of you who didn't know was in 1969 when a group of Native American activists took over the island as a protest about the generally dreadful treatment they were receiving and had been receiving since the first boat load of immigrants piled into the country. In particular it was against a kind of forced integration that was in action at the time. 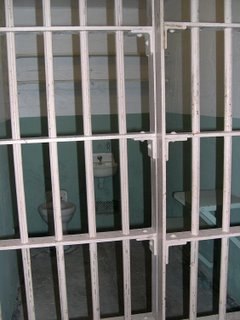 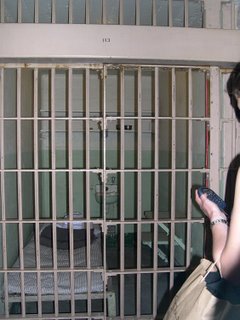 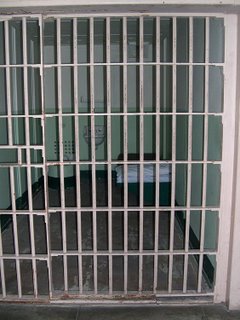 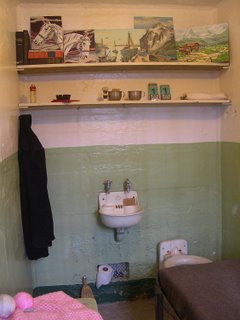 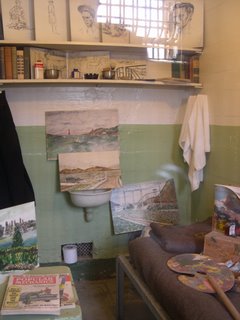 Wandering around the island is pleasant and no doubt good for you. But the most interesting part is the audio tour of the prison itself. Ex wardens and former prisoners tell you what was where, what it was like to be there, and about the various escape attempts. Some of the latter were studies in patience and ingenuity. 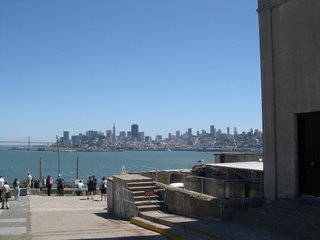 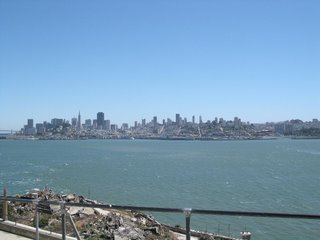 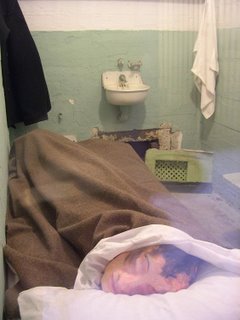 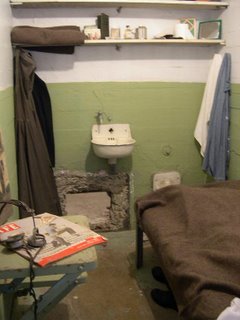 We took the ferry back. This is the only way if you discount swimming which is ill-advised because the waters have treacherous currents and sharks. The sharks however are only vegetarian, which means they kill you by boring you to death about how they don't eat meat. (Only kidding. Smiley face.)

San Francisco is one of the few major cities that still have abandoned harbour warehouses. In many other cities these have all been converted from crummy, rat-infested eye-sores to some of the most expensive places to live in the city.

We headed over to Chinatown. Actually half the city could be called Chinatown, but we were heading to the bit that has most of the restaurants. It was curious to hear the children on the bus all speaking Chinese to each other. It's not what I would have expected, but it was nice to hear. I don't hear enough Chinese these days except from random conversations on the train via the airport and from my Shanghai neighbour at work.

We ate in a Vietnamese restaurant that we think was called Pho or Golden Flower. I know, go to Chinatown to eat Vietnamese is a bit like getting French food in a Tapas bar, but Amsterdam is short of Vietnamese places. Keeping with the Asian theme, we went on to the famed Japanese Tea Garden. However it was shut.

That evening we decided to check out the real nightlife of the city. We took the old-fashioned tram to Castro, the lively gay side of town. Even for a Wednesday it was pretty happening. A few restaurants were open but we decided to look for our light supper in another part of town, supposed to be the main going-out centre, the Mission District. We walked there, avoiding dark streets, and for those of used to the scale of Amsterdam maps, it was a touch further than anticipated. The Mission District is a going-out sort of place, but it's also a bit down-at-heel. It's supposed to be good for bar hopping, but it's not like there is a line of bars, you have to know where the next one is. Most bars and restaurants were closing as we were arriving. The only clearly open eatery was a Mexican fast-food 'restaurant' (it had a counter and no chairs as far as I could see) which was packed and needed a security guard. The two guys who went in as we passed smelt like they had come from a cannabis sauna. They seemed to be in good spirits.

We also passed a guy who was dressed a pimp. The very stereotype of a pimp. If you'd have seen him in a movie or gangsta rap video you'd have said how clichéd surely pimps don't dress like that any more. I'm not saying he was a pimp, I'm only saying he dressed like one. And the girl on his arm dressed like a ho.

We realised a snack would not be forthcoming without queuing for a long time behind two guy who could be classed as a class-C narcotic. We bought some nuts and hailed a taxi. The taxi sped through the city and afforded us our first Bullitt moment. A Bullitt moment can only happen in San Francisco on those streets where the roads slope up or down but are level for an intersection. It's when you go too fast on the up or down and it causes a bit of a suspension crunch you hit the flat. I was so happy to have had this experience. Someone should start a Bullitt tour, so that any tourist can experience this (as well as a few key sites from the movie). 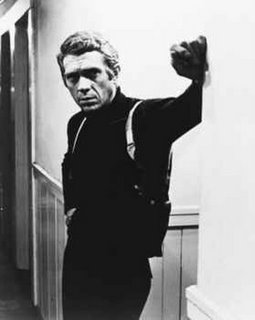