As the trip was drawing to a sad close, it was time to buy gifts. We spent a small fortune at an Aboriginal store / gallery and then went to a Hitchcockian bakery for lunch. Hitchcockian because here we noticed for the first time that in this town, ravens outnumber gulls. They strut around like they own the place, and quite possibly they do. It's unusual to be in a seaside town with hardly any gulls. It's clear the ravens had taken over. 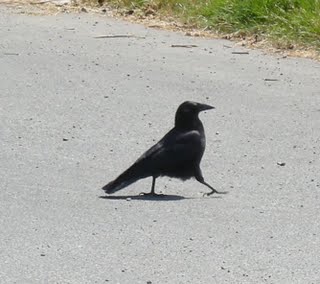 We had another "slice of life" moment with a lawyer talking to a father and new wife about a child-custody issue with lurid allegations flying from both the father and the absent wife. Do all lawyers in the Americas conduct private meetings in public places? Maybe they all think they're on TV and need an audience. I'm not complaining, but it means that the writer in me needs to hang out in more American cafés. It means that my new legal soap opera, The Bar, set in a bar near law courts, will practically write itself.

That evening we chose the Spotted Bear Bistro to be our place du mange, as the French probably don't put it. We didn't book, but were early enough that we could nab the last non-reserved table. It's a small place that does tasty, well-sculpted food. I had some great duck and Cath some holy butt. Every meal was served with froth. Now before you start asking what is this froth? Is it some crazy American side dish like grits or fries? No, it's basically vegetable (or other) juice whipped up into a frothy pile. Intriguing and very molecularly gastronomic. The name of the place is very molecularly gastronomic as well: they all seem to have names that are
Posted by Peter More at 12:23
Email ThisBlogThis!Share to TwitterShare to FacebookShare to Pinterest
Labels: Americas, Anthropology, Food, Music, Travel, Wildlife