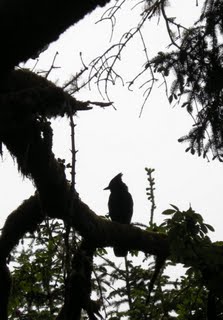 I haven't really said how great the breakfasts were at our bed and breakfast. In fact both the bed and the breakfast were splendid. And I do feel the bath should also have got a mention. But somehow Bed, Bath and Breakfast never caught on. Probably because it sounds like a novelty American store or a doss-house. There was a lot of thought and effort gone into these breakfasts. And our keepers must have got up so early to make them. I couldn't run a bed and breakfast place. Bed and lunch, perhaps. But not bed and breakfast.

As I'd said before this is an area chock full of First Nationals (this doesn't seem to be the correct term, despite seeming like should be) and there are a few places to find out about their culture. 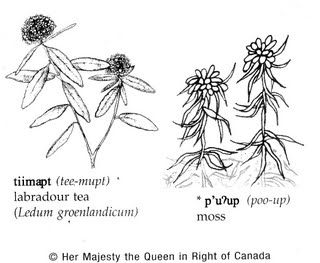 One tribe have organised their own trail (seemingly with some help from the queen who apparently is an expert in the tiimapt and poo-up flowers). The Nuu-chah-nulth trail (previously the Wickaninnish trail) begins with the Wickaninnish Interpretative Centre, which sounds like a dance studio, but is in fact a museum undergoing refurbishment and gift shop. BTW, an interpretation of Wickaninnish is Nuu-chah-nulth. 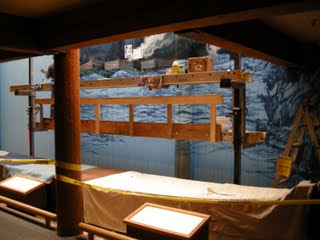 At the museum we picked up more brochures on what to do in case of bear attack. Apparently it depends on the type of attack. Sometimes you play dead and sometimes you retaliate. And woe betide you do the wrong one. Basically, pregnant or nursing female bears require the opposite tactics to curious male bears. Which all means that the only way to know how to survive a bear attack is to be a competent bear psychologist and gynaecologist. Seems that bears are not the simple picnic-hamper-stealing creatures we all thought. 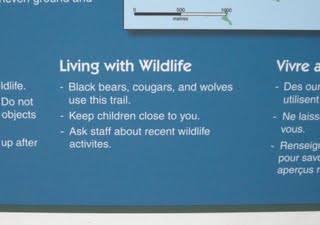 In one part of the Interpretative Centre, a ranger was giving advice in a strong Scot's accent. I think that made him a Celtic ranger. (That was the kind of joke you should play dead for.) I was disappointed his advice was not something along the lines of "ye be'er no bother a bear wi' bearns." (That was the sort of joke you should attack with a stick.)

First thing you see on the trail is a totem pole donated by the Nuu-chah-nulth tribe. It depicts an eagle standing on a whale which is balancing head-first on top of a bear eating a fish. The Nuu-chah-nulth are presumably circus folk. Although I am pretty certain "Nuu-chah-nulth" was a hit for Bananarama in 1986. 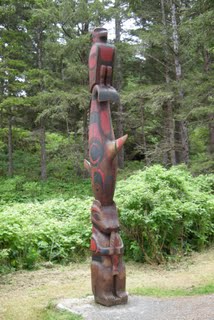 Near the totem pole is a stony beach covered in shell fragments. Here we had another encounter with the mysterious local habit of balancing stones on top of rocks. Apparently it stems from basic First Nations trail signals, and the stones mean things like, "turn left here," "bear seen ahead" and "wasp nest 300 meters South-West in the leaning tree." (You could say they were "really saying something," which is the last Bananarama joke I will ever tell, I promise.)

A little way on there is a barrier with not one but two signs warning you about bears. In this part of Canada, bears seem to be the equivalent of paedophiles in Britain and terrorists in America. I was expecting a sign saying, "Current Security level: Bearcom 3" 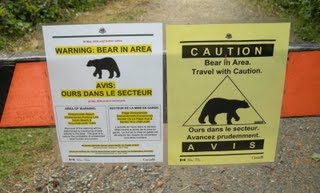 For all these warnings, bears seem to be pretty thin on the ground. (Not unlike paedophiles and terrorists.) On no part of the pathway, sorry, trail did we see a single bear, curious, pregnant, male, female or otherwise.

The path, however, was a haven for that neglected and oft vilified member of the animal kingdom, the slug. Give it its own curly home and it's cute. But, homeless, it's disgusting and slimy. People are so shallow. 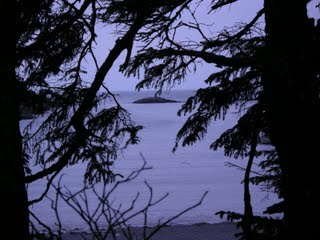 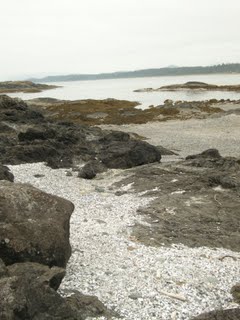 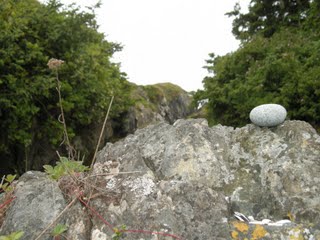 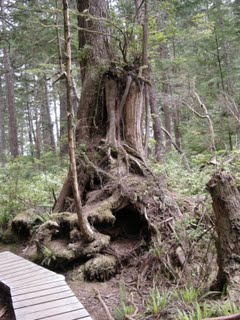 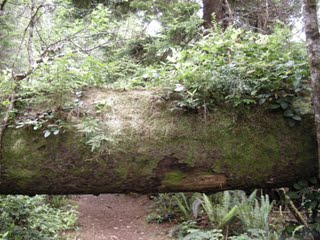 We never had time to get all the way to the end of the path (at Florencia beach), but we got close. We rested near a couple of surfers who were discussing where the best places to surf were. Surfers, stoners and hackers. All three only ever talk about that one thing they do.

We traversed the trail back to the gift shop and then drove further along the coast to the small town of Uclulet. The exciting part of the trip is that you pass a tsunami hazard zone. Although, I believe tsunamis are actually more scarce than paedophile bear terrorists. 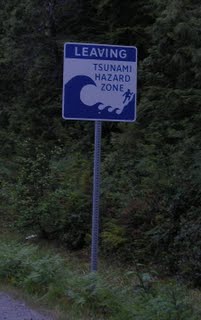 Uclulet is much less quaint and we didn't even stop. (Sorry Uclulettians.) We headed back to Tofino where we took in a gallery of First National stuff, a couple of shops and then ate Thai food at the Schooner restaurant. Here they played a reggae version of Pink Floyd's Dark Side of the Moon. (This was probably Dub Side of the Moon by the Easy Star All-Stars, who have also redreaded the Beatles and Radiohead.) It worked remarkably well, but then one is famed for being laid-back music beloved by stoners and so is the other. 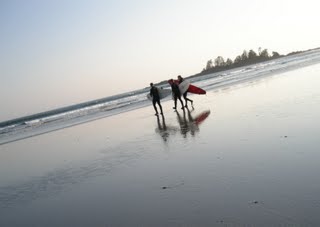 It was another day with a lack of bears. They must have been off terrorising Americans or hanging outside British schools. Despite this lack, it was quite the wonderful day and could only be rounded off with a bath overlooking the jungle. 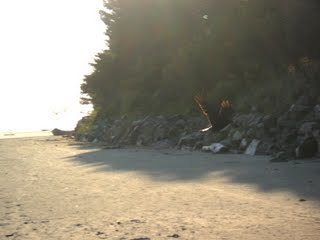 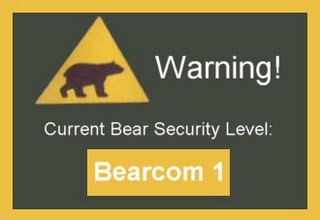