My Own Personal Montana

At the beginning of last month we got a little booklet announcing a new TV channel here in the Netherlands. From the pictures it was clear we would see a lot of air-brushed teens wearing too much make-up and often dressed somewhat sexily. All, right! Except, of course, that it's actually the Disney channel. 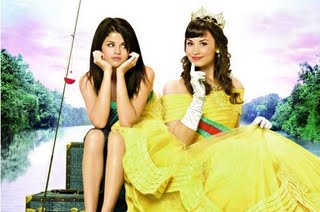 Time was that The Disney channel would be filled with cartoon dogs, ducks and mice. Now, the schedule seems to be clogged up with something called, Hannah Montana. Which is something of a porn-star name, you have to admit. I do know who Hannah Montana is. At least I know every toy store I go into has a tall section filled with pink crap with her face on it. For those of you in blissful ignorance, allow me to shatter that. Hannah Montana is the pop-star alter-ego of an ordinary, American school girl in a hugely successful US TV show. I also learnt from Cath, who is in charge of celebrity gossip in the house, that the girl playing her is not some nobody plucked from obscurity, but the daughter of the man who recorded "Achy Breaky Heart." Yes, that man was allowed to procreate! Five times according to Wikipedia.

It's shocking how airbrushed the young, white leads are in all these shows. (The black characters only seem to peer out from behind the white ones so it's hard to see how airbrushed they are.) I guess Disney has always been peddling fantasy, but when the fantasy was a mouse surrounded by dancing brooms or a cartoon princess adapted from a fairy tale, it seemed harmless. But when the canvas is a teenage girl onto which some cartoon vision of beauty is painted, it becomes a little disturbing.