Since retiring, my parents have become much harder to track down. It doesn't help that some years ago they bought a run-down little farm in the under-populated part of France (i.e. that bit which isn't Paris). So a couple of months of the year they are there, making the place habitable. Which two months of the year is anybody's guess. You never really know until the last minute whether they'll be there or not, because they answer to no one. No one, that is, except the bowls club in their local village.

So it happened that Cath and I who, at the time, were still answerable to the man, or I suppose more accurately, the men, booked our wee trip in advance only to find my parents couldn't be in France then and had to ship back to the UK. We could have gone to my parent's place without them being there, but it was quite a long way to go to end up surrounded by nothing but sheep. So we decided to not stray quite so far from the airport as all that. To this end we selected the village of Le Bugue in the Dordogne. 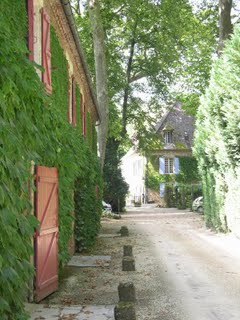 Bergerac airport is one of these tiny airstrips or air fields that have been hurriedly turned into an airport because of the increase in cheap flights. The list of airlines who use it is small and a summary of bargain-basement airlines. Most of which are British. Bergerac as you know was named after an ex alcoholic policeman based on the channel islands (or Les Malvinas as the French call them). A line of portacabins outside the shed where you collect your luggage represent all of the budget car rental companies. The portacabin for our particular firm was populated by a lone Englishman. A small queue formed but it didn't seem to bother him any more than he already was. It was not a great job, but in a country with so many English people with only adequate French, it's a rare "proper" job.

By the time we had our car it was dark. We had a couple of hours' drive along generally pretty good roads and through some great-looking villages before we arrived at Le Bugue. We drove around the village a few times and eventually had to stop and ask in Hotel Le Cygne where OUR hotel was. It seemed very insulting to do that. "Say you, man with a perfectly good hotel, where is the less conveniently-placed one that we picked instead of yours?" But the man was very friendly (and helpful) about it. 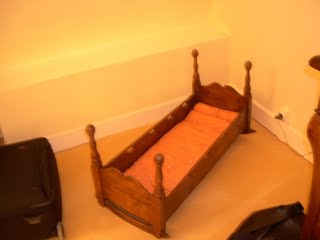 Our hotel for the next few days was the Domaine de la Barde, which we picked partly for the name, but mainly for it being a beautiful old place in plush grounds. The receptionist very kindly waited late for us and 'upgraded' us to a very large room in the loft with some curious furniture including a tiny rocking crib. The downside of the room was that the windows were very small but did offer a great view of one of the staff's motorbikes. A tree blocked the sumptuous gardens. On the plus side the bed was solid and firm and the room quiet and dark. We slept like two snug logs in a large ipod.
Posted by Peter More at 20:30
Email ThisBlogThis!Share to TwitterShare to FacebookShare to Pinterest
Labels: Anthropology, Europe, France, Transport, Travel, TV, Wildlife