Me Myself and Isolation: day 1

So, this is the first day of self-isolation after a trip to Sweden. We knew we’d have to do this, and so prepared. We decided it was worth it to have a break AND bury Emma’s grandma. We’re now stuck indoors for a fortnight.

We planned for it by signing up for one of those services that delivers ingredients and instructions on how to cook a week’s worth of meals. I might mention their name if it works out.

So far it’s fine. But the two of us are ‘lucky’ in that being locked indoors for two weeks does not fill us with dread. The toddler, however, is gregarious and gets antsy if she can’t jump in a puddle every other day.

I’m not completely sure of the exact rules of self-isolation in the UK right now so we have to find out if nipping to the shops is allowed. The rules here change very frequently. I think the government assumes we’ll think they are on top if it if they keep issuing new guidelines. We are in the process of opening things up here, but it seems for every two new things opening up, something (or somewhere) has new restrictions.

It’s a far cry from Sweden. Sweden didn’t do the lockdown thing. They kept things more or less normal, but said, “you must social distance.” Swedes, on being told they had to be two metres apart, had a brief initial panic worried that this meant they could be no more than two metres from other people. Social distancing is what Swedes call socialising. They were the odd man out of Europe, despite the fact they were apparently the only ones who did what they EU scientists recommended and didn’t panic into going full lockdown for everyone except the Prime Minister’s special adviser.

(If you are not from the UK, then I’ll explain that behind the prime minister here is a Rasputin-like figure called Dominic Cummins. At the height of the lockdown, he drove himself and his family on several long trips against all guidelines and, just to show his contempt of everyone with a soul, explained one of the trips was to “test his eyesight.” Driving to test your eyesight is like operative heavy machinery to see if you are drunk. He was quite rightly ridiculed for this, but these days in politics, shame only makes you stronger.)

In the UK, you have to wear one on public transport, shops and anywhere where people congregate. Except restaurants and bars or anywhere where you need your mouth for eating. Which makes sense, kinda. At the airport in the UK, you needed a mask everywhere. But the moment you wandered into a restaurant, and you didn’t need a mask, even though you weren’t any further from people, really.

It was weird, after 3 -12 months (however long it’s been), to go somewhere where practically no one is wearing a mask. I was so used to a certain level of fear, it took a little bit to adjust that to caution. But that’s maybe a difference between Sweden and the UK. In Sweden they hope people see the reasons for rules and in the UK, rules and laws are often fear-based. I mean most of our headlines are fear-based. It makes Britain look like a bunch of scared people all trying to scare us into thinking they should be in charge.

But the fear creeping into Britain is not new. As I said, somewhat jestingly, fear is the main way that some of our most popular newspapers sell their product. Readers of these get at least one big fear for their way of life every day. The rise of UKIP and the further right (racism is always rooted in fear) and tactics used to secure a majority for leaving the EU attest to the power of fear.

Anyway it’s already day one and I’ve gone into the dank corners of politics. This is meant to be a journal of a family in self-isolation (albeit with a family unit), a chance to document some thoughts on this bizarre situation we find ourselves in and a way to force myself to write regularly. Expect 13 more. 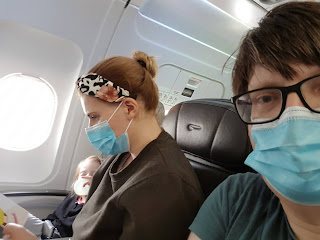