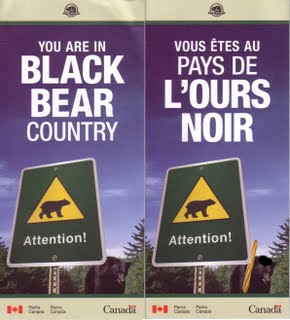 Turns out Blenz must have been good as I went back there the next day. I was getting coffee to take in the car, which being American had dozens of places to hold drinks. From in number of drink holders you get in American cars, you would think that the average American drove everywhere with half-a-dozen cokes and coffees ready at any moment to be slurped. Some cars even have pull-out trays for eating burgers whilst driving, and I'm sure there are Sat-Nav systems that can automatically send your drive-through order to the nearest outlet of your choice. The obvious joke is to call it a Fat-Nav, so I won't. I'll call it a TumTum system instead.

We checked out of the hotel and drove to one of Vancouver's many ferry terminals. It seems to be Vancouver's top export. We had allowed a lot of time, expecting Monday morning traffic to be quite heavy, but instead arrived super early. We paid up and joined the queue. We were on holiday and I had coffee, so waiting was not a problem.

The ferry, it was announced, was delayed due to a "stall on discharge" which is a very serious medical complaint where I come from. We chuckled a while, getting the full comedy value from the statement. But we acknowledged that it was a pretty bad thing to happen to you. Experiencing a "stall on discharge" and holding up all the other people eager to discharge behind you is bad enough, but to have it announced over the tannoy on top of that... Gloik!

After an uneventful and somewhat productive crossing we went back to our car. Those of you familiar with comedy karma (or karmady), will not be surprised at what happened next.

Sitting at the front of the boat, scores of cars behind us, I turned the key, but the car wouldn't start. It just stood there. People behind us got annoyed, eager to shoot off out of the hull. We got flustered, I turned the key in all sorts of directions, pushed it, tugged it, nudged it, but nothing we did could start the car. We had "stalled on discharge." We had not only delayed people the way we had joked about other people doing, but presumably it got announced to the next generation of passengers, who sniggered into their coffee beakers like stupid immature children.

It was acutely embarrassing and I'll never forget the look of disappointed seamen. But it does happen to a lot of drivers. You've heard that, right? 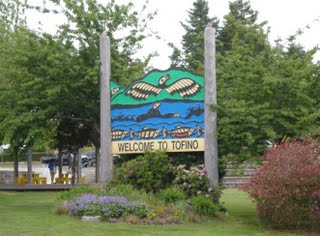 Once safely on the island and moving, we headed for the tiny harbour of Tofino. It wasn't too long before Cath spotted her first deer and sometime later a chipmunk. This could only mean more wildlife was on its way. We started reading up on what to do in case you encounter a bear. 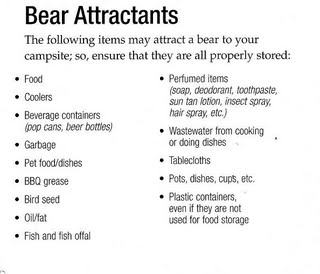 Soon we arrived at Tofino and the guest house that was to be our home for the next week. They excited us with news that only that morning they had to scare a bear away from pestering their bins. It's funny that one of the very things we wanted to see was actually a pest to those who lived there. But I suspect there are people somewhere in the world who yearn to see a rat, pigeon or mosquito.

Our room was a nice size and shape and the furniture new and clean. The bathroom window opened up on a splendid view of the forest. It was almost like bathing in the jungle.

After settling in, we drove into Tofino itself to check out the lay of the land. It's a quaint holiday village still with a thriving local population. A large part of this thriving local population is Native American. There are numerous Native American settlements around the area. A small group of teenagers hung outside the supermarket, you know, like they was regular kids and all that. Cath was quite surprised to hear them refer to each other as Indians, as in the US, the word has long fallen from favour. Especially as it was wrong in the first place. Well, it makes sense they are not called Native Americans in Canada, and Native Canadians sounds silly. In Canada, they call them Indians, Aboriginals or First Nations People. Or, often, by their name.

That night we ate at the Shelter pub/restaurant where Cath tried the local delicacy Thai yellow curry.