The racial mix of a city is often what gives it its identity as much as the architecture, street signs and predominant shops. Certainly as far as visitors are concerned. Vancouver has a very large Asian contingent. It seemed to me, from my unscientific survey, even more so than San Francisco, but Wikipedia said, "No." Seems that they came to dig for gold, build railways and, more recently, to get away from Hong Kong to somewhere else with the Queen's picture on the money. 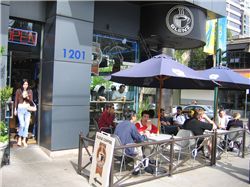 On a junction near our hotel, two Starbucks stand on opposite corners like identical twin boxers. Starbucks breed like rats and spread like fungus. It has a business model very similar to that of cancer cells. We adjourned to a branch of local chain Blenz and planned our day. (We don't know that Blenz is actually any better, but their clone army is no where near as developed as Starbucks' and so they seem less dangerous.)

In fact, having taken too long to write this up, I am no longer able to read my writing fully and can't be sure whether the coffee at Blenz was "tasty", "nasty", "pasty" or "roasty." I think the latter. And the breakfast we had there seemed to be very gree.

It was a slow news day in Vancouver, which I am sure is an expression somewhere. "This conference is as dull as a slow news day in Vancouver." The local Metro headline read: "Vancouver 2010 Games Ticket Design Unveiled." I realise that it's the Olympics, or at least the Winter Olympics, but in very few places round the world would the unveiling of ticket designs fill the front page of anything except the Ticket Designers' Gazette. Or perhaps also The Counterfitters Courier. But not normally the newspaper for a city this size.

In other non-news, a scout volunteer faced sex charges. Again, this would not normally be news. We were under the impression there was now even a badge for that.

Having failed to be entertained by the newspaper, we moved on to the money. The money is actually very interesting. It has both French and English on it as well as a picture of the British Queen. On the back of the 20 dollar bill, there is a depiction of a small boat laden with Native Americans or, as the Canadians call them, Indians. They looked like refugees trying to find somewhere to preserve their culture.

Fully caffeinated, we ventured off across the city. We walked over a long bridge that passes over the island of Granville. A sign advised us "Left turns restricted ahead, use hemlock." Hemlock is a good old fashioned poison, the one that was supposed to have killed Socrates, in fact. Somehow it seemed to us that no matter how impossible it was to turn left, resorting to any form of poison seemed a tad drastic. 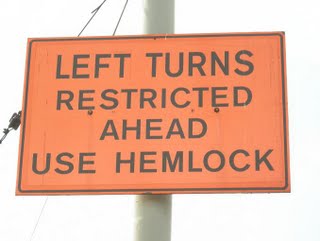 We fully expected to see follow up signs like, "Lane closed ahead; consider driving your car over side of bridge" and "No Parking: It really is quite pointless when you really think about it."

As our next point of call after Vancouver City was the semi-wilds of Vancouver Island, we were heading to an outdoor clothing store to stock up on non-extreme survival products. We caught a bus for the rest of the way. Canadian bus drivers are very, very friendly and very, very helpful. In most places in the world, bus drivers are grumpy and petty. Not in Canada. Here, they are more than happy to tell you how to pay; to not worry about a lack of change; where you should get off; how far you will have to walk afterwards; and what better ways there are to get there. It was only marred by the fact that our bus driver on the way back told us to change to get a connection that would take us closer to where we wanted to be, but the second bus never came. It could mean that beneath the very, very friendly exterior, Canadian bus drivers are actually more twisted than bus drivers elsewhere, but I find that hard to believe. We were probably too impatient by Canadian standards or something unexpected had happened, such as the bus driver stopped the bus to help deliver a calf. 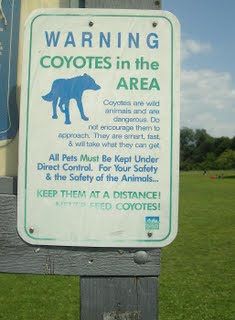 It wasn't a big problem as we were not too far away from where we wanted to be and there was an ice cream store on the way. The weather was that kind of ice cream hot. It was also in part a pleasant walk, through a small park where a sign warned of coyotes. Coyotes were very much dissed in this sign. I'm sure they're just cute, misunderstood pooches who just need a hug and a tummy rub.

We traversed a small wooden walkway and found ourselves on Granville island, which is basically a huge market place filled with sumptuous, fresh delights and a gathering point for street performers. There is even a theatre there where a local group of thespians do some of that improv stuff I've been hearing so much about. How do they do that? They're like magicians or something. You should really check it out.

We took a cute little Disney ferry back to the main downtown area and walked back to our hotel.

Canadians, as well as having the Queen on their cash, do spelling correctly. Harbour has the necessary extra "u" and centre is spelt like that and not the American way, which I believe is "santa."

For dinner, we took ourselves to the Gastown part of town, famed for its gas. We ate so-so food and drank great self-brewed stout at the Steamroom bar, built around a room famous for its steam. After eating and visiting the Vapourcloset, we jumped on a larger ferry across a larger stretch of water to North Vancouver.

The ferries are almost exactly the same as the ones that chug people and bikes to and from Amsterdam North. Already a tad delayed, we had a little trouble finding the way out of the ferry terminal on the other side, which made us even later. Eventually we found a way out and climbed the steep, deserted streets to find a tiny community centre. I had managed to locate us some improv on a Sunday.

Way back, when the hills were mere mounds and people still believed electrons moved around the atom, I learned how to do a crazy little thing called improv. It's basically making stuff up like kids do and follows a simple pattern of basically agreeing with everything. One of my first teachers was Canadian Alan Marriott. Since then he's gone back home and formed his own group there.

Sunday, when the sun is still shining, in a part of town barely connected with the centre are not things that help shows have audiences. We arrived (late) and doubled theirs. But, we were on holiday and so having what felt like your own improv show given by one of the best improvisers I've known just adds to that holiday feeling. After all, it's what a Saudi prince would do.

After, we took the ferry back and wandered around Gastown, with its trendy and sleazy drinkeries. We found these kid's pyjamas. Had the shop not been shut, we would have bought them for any of our nephews and nieces we were planning to give nightmares to.

We eventually decided to grab a Guinness in the Lennox Irish bar on the edge of the old China town area. We sat near the window and watched people catch the helpful busses home. We also realised that even in Canada, there are people who are homeless. "Jebus, where is this Utopia you promised us? You did promise us a Utopia, right?" 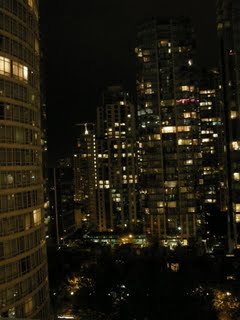