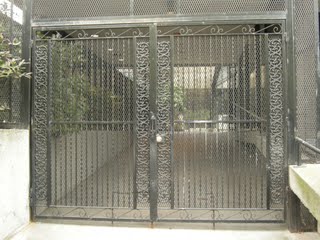 Canada is the US's personal New Zealand. On the surface, Canada looks very like the US. Same roads, same street signs, same stores, same clothes. Only a slight preponderance for beards gives you a hint at the vast difference that lies beneath the surface.

First thing that caught our eyes as we drove along the highway was a mega mosque. This is the equally vast equivalent of the American mega church and confirmed our suspicions that Canada is in fact a Muslim country.

There are several subtle differences that we immediately noticed with the Canadian way of doing things. Their traffic lights do a strange flashing green light thing that seems to mean, "go, but I ain't taking responsibility." Also there seems to be a conscious effort to make blocks of flats and other tall buildings ugly. 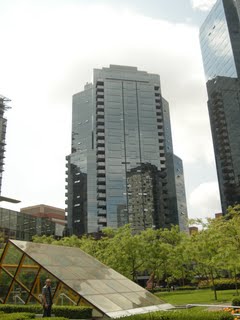 After driving into the core of Vancouver and finding our hotel, we headed out for food. We had received a recommendation from one of Cath's colleagues. A place called "Sanafir" which is a Silk Road / fusion restaurant. Basically you are served a series of dishes based on points of the Silk Road which connects the Middle East / Mediterranean and Asia. It was great, enormously tasty food served by Bond Girls. I kid you not, all the women were supermodels in their own unique interpretation of the tight, black uniform. Any one of them could have met James Bond at the roulette table and ended up back in his hotel room, chastely under the sheets not realising this was their last night on Earth.

The street that the restaurant was on was one of the major going-out / shopping streets in the city, despite being in the process of being dug up. (If that's not too many "beings.") There were lines of young and enthusiastic "pimplies" lining up outside all sorts of pubs and clubs getting ready to shake their pimples to the music of their choice and maybe even, if their luck held out, meet another like-minded member of their sect and press pimples with them.

We passed a great human statue. Normally, I have a problem with human statues as the only real skill involved is being able to keep still. Personally, I feel if you have this skill, then buy a camera and produce great wildlife photography or buy a gun and become a sniper. Don't clutter up the streets. It almost only becomes acceptable when the outfit and makeup is intricate and, when there is movement, it is done well and in keeping with the theme. But in general, anyone with a few motors, some Mechano and a cloak could build a machine that does exactly the same thing; freeing the human version to go and work in a salt mine or something like that. In Amsterdam, especially, the art-form has been lost. If you go to Dam Square, you'll see scores of "human statues" but instead of standing still in an intricate outfit with painted skin and stylised hair, you'll see middle-aged men in ill-fitting rented costumes, standing fidgeting on a box. However, sometimes they are so bad they become fantastic. (This is Rule 9 from Ed Wood.) My personal favourite is a man with middle-age spread, a Batman suit and a bored, dejected expression on his face. Only the truly ironic (or a rose-tinted child) would want their picture taken with this guy.

On one corner there was an enthusiastic troupe of Christian street thespians performing for a small group of mostly other Christian street thespians. I think they were re-enacting the parable of the non-Samaritans who passed by on the other side rather than help an ailing art form.
Posted by Peter More at 22:43
Email ThisBlogThis!Share to TwitterShare to FacebookShare to Pinterest
Labels: Americas, Anthropology, Art, Food, Impro, Movies, Religion, Travel, US, Wildlife