So, as the fates of breakfast oft decree, the breakfast room was pretty full. We managed to find a table, but, once three teenage sisters arrived, there was no getting near that waffle machine.

We had a specific lunch place in mind that our small guide spoke highly of. As we walked towards it, we realised it was not as close as we had thought. There should be a warning, "things on guidebook maps may be further than they appear." 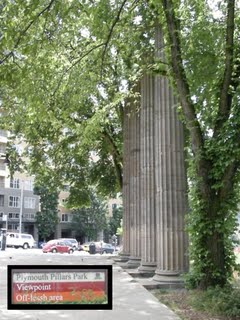 On the way we passed four random pillars. Someone had built four pillars in a line as if there had once stood an old amphitheatre. They sit in a tiny area of concrete surrounded by some trees and this seems to qualify it being called Plymouth Pillars Park. The pillars commemorate a church that was knocked down to make the nearby interstate highway. The church was built in 1891, which could have made it America's oldest free-standing building.

When we arrived at our chosen destination, we found the place had a completely different name and menu. There should be a warning, "things in guidebooks may be less actual than they appear."

We doubled back and found a PF Chang, one of a chain of stylised Chinese restaurants. The décor is typical, slightly upscale American restaurant and not at all Asian. Their gimmick (and most US restaurants have a gimmick) is that the waitress mixes a sauce for you at the table. Pointless in our case as our food already came with a sauce, but the waitress enjoyed herself.

Because we are dangerous rock and roll funsters, we spent the rest of the afternoon in the library. That's it, bitches, the library. We had some future-fortune related research to do. But that didn't mean we couldn't browse for fun. 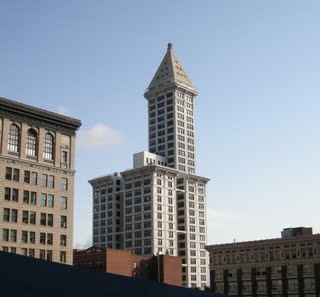 Fire engines in Seattle (and probably other US cities) are very, very loud. And if the very, very loud siren isn't enough, they have a horn that is even louder. The firemen all wear headphones because otherwise they'd be deaf. Even people in the street in danger of being deafened. But if any country is going to over-react in terms of safety and somehow add a whole other level of danger, it's going to be the US.

We rounded the evening off watching more improv; this time the same group as yesterday doing a Theatresports battle. It was enjoyable to watch skilful players with a lot of character (and characters) strip away much of the faff you get with theatresports and just make it fun. Even the judges were fun

Afterwards, we walked home through the crazy street people; past the alley rats; and home to the hotel to dream of the coming waffles.
Posted by Peter More at 12:24
Email ThisBlogThis!Share to TwitterShare to FacebookShare to Pinterest
Labels: Americas, Anthropology, Books, Food, Impro, US, Wildlife