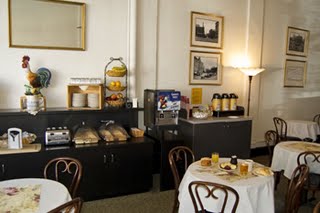 Our new hotel was equipped with one of the wonders of modern breakfast technology – the waffle maker. This one was about 30 years old, but still makes a mean waffle. Or maybe the reason is that it is so old. We managed to pick a time where not so many people were down for breakfast and so there was plenty of room. There is a constant need for strategy in hotels with limited dining space to come down for breakfast at the right moment. The trouble is everyone else does the same and it's quite common for everyone in the hotel to assume a particular time will be the quiet time that day only to find the entire hotel trying to fit round a few small tables.

We did a little work at the hotel and then rewarded ourselves with some of Seattle's Best's coffee, not necessarily Seattle's best coffee.

Being "downtown" the crowd in the coffee house was less "authorly" and more "slice of life." On one table, a very large guy was telling his new Filipino bride how much he loved every little thing about her and how awkward the wedding had been. She seemed not so enthusiastic. And I was desperately searching for evidence to show this was a mail-order wedding or not. My slender gut says yes.

On another table a divorce defendant discussed the fineries of their case and some of the inconsistencies with the other side's case. It all sounded very confidential, so I listened all the more. It was hardly whispered so it couldn't really be called eavesdropping. In fact you'd have to try not to listen.

This was definitely the hobo quarter (or down-and-out-town). Seattle seems to have its fair share of down-and-outs. So many in fact, that many must be down-and-out-of-towners. It's not clear why there should be so many or appear to be so many.

In a square near the tramp district, there was a market of several stalls. Almost not enough to call it a real market. They were spread out along a path so that market took up as much space as possible. The theme of the market was "things that aren't very good." The only food on sale were something like popcorn, but not exactly popcorn. Music was provided by a guy playing the violin over the Star Trek theme tune. He wasn't very good. Even with most of the music provided for him, so that he just had to play something at the same tempo and with notes that weren't too discordant with the original, he still wasn't very good.

We looked lost for a bit and a garbage man stopped on his beat and asked us where we wanted to go. We explained we were looking for healthy food, perhaps vegetarian. He radioed back to base and they looked up and recommended a place round the corner as probably "doing vegetables." It was the best they could suggest. But, nevertheless, it was a great and surprising service. We never found out how wide-spread this "garbage man tourist guide" service was.

What we were directed to was a pho place. Phos are a once-fad Vietnamese noodle soup. These were a bit bland but not as bland as the one I'd had a few days before. The bar opposite called Mitchelli's offered "Cock Tails." I'm sure they mean "cocktails" as the picture was of a cocktail glass with olive, not chicken feathers. I personally think it's some kind of gay code for a specific type of bar.

Dinner that night was at 94 Stewart, a cosy little place around Pike Place Market with a very friendly waiter called Andy, great food and good wine. I had a lamb burger and a beer from well-named Oregon brewery Hair of the Dog. Cath had muscles and a 2008 William Church Viognier. 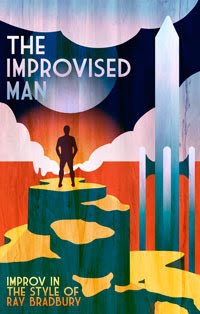 The evenings entertainment was an improv show by Unexpected Productions, whose work I have admired before. They did a show called "The Improvised Man" in the style of Ray Bradbury stories, which was exceptionally well done, despite an audience of 11. Incidentally, I think I was 11 when I last read Ray Bradbury.
Posted by Peter More at 18:12
Email ThisBlogThis!Share to TwitterShare to FacebookShare to Pinterest
Labels: Anthropology, Books, Drink, Food, Impro, Travel, US