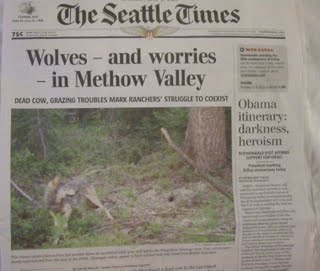 Today is definitely a slow news day. The headline of the Seattle Times was about a dead cow and sightings of wolves.

After our breakfast waffle and coffee (or rather mine, as Cath had something healthier with her tea), we packed up and headed out. We first made an unscheduled stop at the kilt shop. That's right, the kilt shop. We'd seen a couple of people around town in kilts the colour of khaki shorts. I believe the colour is called khaki. They looked practical and not too out of place. And now we'd found the shop. I was sorely tempted: I even got measured up and talked models with the assistant. But the fact that they are only really practical in warmer climes and would be seen as weird in most places in the world put me off. I would not wear them enough. I'm still torn, and reserve the right to buy one in the near future. 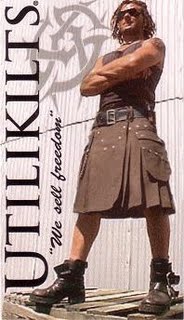 We did some research in Borders and bought a selection of magazines, including the essential Bitch. This was one of the few Borders in the country without a public restroom. This is due to the undesirables who often hang out on the street out back and on one occasion set fire to it. Having bought some stuff, we were allowed to be escorted to the bathroom.

Car rental companies always offer about 15 schemes all of which probably work out to cost the same amount, but the implication is if you pick the right one, you'll save money. The fact that Messrs Hertz, Avis and National are very well off implies otherwise.

Mr Hertz, feeling very generous in his vast mansion (so big he probably needs to rent a car to go from one wing to the other), we got a free upgrade to a "brand new Toyota Camry." Somewhat like being supersized for free. No, exactly like that. The car really was brand new. It had 104 miles on the clock. It felt so new, I wondered if it had been a stowaway on the Hyundai boat I saw the other day.

We drove back to our hotel to pick up our bags and use the toilets. I'm glad I did because I solved the mystery of the washroom sign. This mystery was caused by a sign on a door stating that the toilet was out of use, whereas last year the same door lead to the spare dining area which Cath was certain had no toilet facilities.

I also got to witness a slightly drunk and increasingly annoyed homeless guy being seen off the premises. He was insistent that he had been given a cheap room before and wanted one again. The hotel staff didn't deny it, but said the hotel was full. Which, judging by the breakfast room, was true. He started off calm, but eventually got frustrated and threw some business cards off the counter. He wasn't dangerous, crazy or particularly drunk, as far as I could tell; it was more like he was grasping at straws.

And then we were off. The US has so many small towns dotted around its vast and mostly empty country that naming them got hard after a while. There is a lot of repetition and many end up with quite odd names like (all from the Seattle area) Possession, Humptulips and Aberdeen.

We passed by a couple of Sacred Gambling Grounds (or "casinos" as the Slotmasheen Indians call them) and stopped off at a gas station / minimart in a genuine "redneck" community where I made the mistake of trying to find a healthy snack.

We slipped into the border patrol area and, where a sign declared that it was is open 24 hours. It's good to know as some countries aren't.

As the most foreign, I had to answer a few questions. But because this was a drive-through point, we didn't have to leave the car. In fact it was no different to finding a curious and chatty toll-booth operator, which is not uncommon in the US. She raised the barrier and we were in the fabled land of Canada.
Posted by Peter More at 21:05
Email ThisBlogThis!Share to TwitterShare to FacebookShare to Pinterest
Labels: Americas, Anthropology, Drink, Food, Religion, Transport, Travel, US, Wildlife